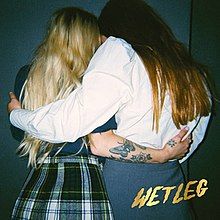 There are few things more 2022 than Wet Leg. The band started as a joke while on top of a ferris wheel at a music festival. From that fateful cabin conversation, Rhian Teasdale and Hester Chambers came out of nowhere with their cheeky hit "Chaise Longue," an outright earworm of synth pop style and dry British irreverence.  The British duo's meteoric rise, including selling out Brooklyn Steel without ever recording an album, immediately without a record led to a fair amount of critical cynicism, but all naysayers were silenced this past week with the release of their addictively catchy self-titled release.

Wet Leg is infectious in a way that few other albums are; impossible to listen to without bobbing your head.  Chambers and Teasdale's production captures their youthful energy and 21st century wit.  One of the catchiest albums in literal years, every track on the album has the potential to be a single.  Don't be fooled by their social-media based rise, the songs are expertly crafted; blending new wave and pop sensibilities that bubbling over with joyous fun and irreverence.  And at a pleasant 36 minutes, Wet Leg is engaging without getting too sugary to listen to in full.

Lyrically, Wet Leg is hilarious, and would be bordering on comedy if it wasn't so sharply executed.   Wet Leg is a signpost for mid/late twenties urban life.  Chambers and Teasdale wax about getting "Big D(egree) and partying.  A lot of the record deals with the sexual landscape of the millennial world, and Wet Leg deftly celebrates the successes and failures of the terrain; be it taking a guy home to fuck after a Vincent Gallo film in "Wet Dream" or the ending of a toxic relationship of "Ur Mum."

One aspect that makes Wet Leg such a refreshing record is that Chambers and Teasdale are not trying to hide their age.  They don't speak in esoteric ambiguities, but rather zoomer vernacular that is painfully relatable.  They muse on hypnotic late-night scrolling and getting high at the supermarket before meeting with their parents in a way that is fun and charming and innocent without coming off as childish.  The lyrics accentuate the overall fun-loving and self-deprecating vibe of the the album.

Again, make no mistake, this isn't a TikTok record.  Chambers and Teasdale signed on the highly sought after record producer Dan Carey, who led the charge on some of Europe's most recent critically acclaimed records (notably Schlagenheim by Black Midi and Dogrel by Fontaines DC) as their producer, and the record was mixed by shoegaze (my favorite!) veteran Alan Moulder.  The result is Wet Leg being a meticulously crafted record; a lot of work was put in the record's carefree aura.  All parties fully realized the record's potential as they tactfully knew when to add sound, and when to add space. There is plenty of hard driving guitars, but could turn to sparse drum and bass when the time felt right.  The result is a full on female rock record that shows all the potential of the next Debbie Harry, as Chambers and Teasdale take the pop rock paradigm and make it something completely and absolutely knew.  Just a a phenomenal pop record.