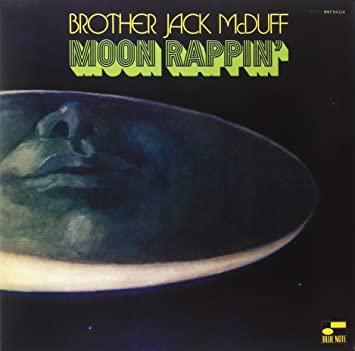 The writing was on the wall for awhile, but specifically after Miles Davis' electric period, the jazz world exploded with new trajectories of the genre.  With funk music concurrently gaining steam, the late 60's and early 70's saw genres develop in leaps and bounds, using the freeform openness of the time to blend styles into ways unimagined less than a decade prior.  One of the many records to come from this period is the funky, albeit polarizing Moon Rappin' by Brother Jack McDuff.

Moon Rappin' may be a tough pill for jazzbos to swallow, as purists will notice a profound lack of jazz nuance.  The "four on the floor" beats are securely planted in rock and roll paradigms, something that many jazz traditionalists, especially back then, would find to be low-brow and watered down drivel.  And I suppose it is, in a very literal way.  Moon Rappin' doesn't have any of the transcendence of, say, a Coltrane record.  But, it isn't supposed to.  This record is rooted in funk; an album for dancing not dissection.   Songs like the opening "Flat Backin'" and the title track show McDuff and crew peppering jazz flutters over a funk bedrock.  So, I guess Moon Rappin' could be called low-level jazz, but it may just as easily be high-level funk. With it's heavy wah guitar and top shelf drumming, McDuff did an excellent job blending the current zeitgeist into an oft stuffy genre.

We (most of the people familiar with this blog) have the luxury of only listening to Moon Rappin' retroactively.  What was once looked at as primitive can now be seen for the ambitious effort it really was.  Looking back now, we can understand the progressiveness and genuine fun embedded throughout the record.  Moon Rappin' is an unintentional precursor for a lot of funk and jam music that we have enjoyed in subsequent years.  There are even some spacey soundscapes that hint at the psychedelic funk soon to be finding its way to mainstream ears.  And as jazz, and it's purists continued to evolve, a new appreciation can be found for Moon Rappin' and the way it bridged the gap between a laundry list of musical styles.