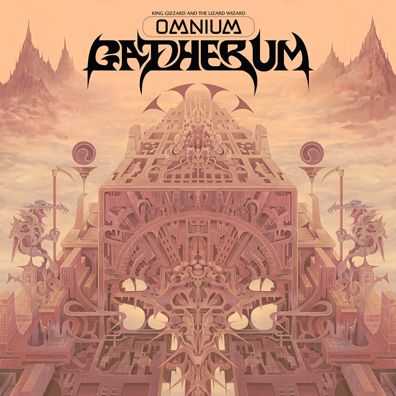 Death.  Taxes.  New King Gizzard records.  Though all three are guaranteed, only two have any degree of experiential expectation or consistency.  However, unlike taxes, or even death, there is no preparation or rites that can be administered to make ready for a new KGLW record.  This past week, with little hype or anticipation, the indie psych world was treated to another out-of-body experience with the Aussie outfit's latest record, Omnium Gatherum.

Omnium Gatherum is KGLW's 'official' post-pandemic record; the first record recorded together in a studio after two years of (successfully) piecemealing their releases from separate quarters.  While the pandemic records were extremely well done, specifically their electronic experiment, Butterfly 3000, Omnium Gatherum possesses a primality that can only occur in a group setting, and can be noticeably missed in their previous three records.

One of the band members (I believe Stu Mackenzie) referred to this album as "jammier." While there are certainly plenty of jam signposts parsed throughout the album, such as the white-boy funk of "Presumptuous," or "The Evilest Man" which grazes on jamtronica, most of this description lays within the bands 18 minute commencement opus, "The Dripping Tap;" one of the finest and most forceful King Gizzy songs in several years.

The rest of Omnium Gatherum follows in the thematic style of "KG" and "LW," in that it is an encyclopedia of all of King Gizzard's styles, rather than a deep-dive into a specific one.  Songs like "Gaia" highlight the bands beloved thrash metal, while "The Garden Goblin" show them continuing to flesh out their synth capabilities.  The Psychsters even row even further out into uncharted waters by implementing rap and hip-hop style break-beats.  There are a lot of things happening on Omnium Gatherum, but the band does an excellent job maintaining cohesion throughout the thirteen song sojourn.  Coming in at 80 minutes, Omnium Gatherum is a long record, and probably could have been pared down a bit, but this may not be of much consequence to the band's dedicated fanbase.

While much of this album explores their sonic history, Omnium Gatherum is far from stale or derivative.  Rather, it possesses an imagination that they haven't had in the past several albums.  Especially with the increased utilization of synthesizers, there is a freshness that is on par with the heaviest hitters in the bands robust catalog.

It's really hard to conclude a King Gizzard and the Lizard Wizard review, because each record is a symbol on a large, well drawn, and ever-growing map.  While rankings don't really work with a band or resume' such as King Gizzard, Omnium Gatherum represents another fantastic release for this exceptionally prolific group, and a welcome addition in the pantheon of the band's releases as well as on the shelf of any psych-rock aficionado.  Welcome (fully) back King Gizz!