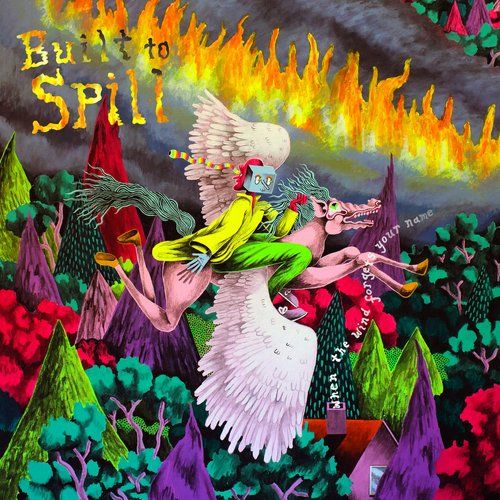 I mean, let's face it.  The 90's were pretty awesome.  The economy was booming, His Airness was bringing championships to Chicago and The Simpsons were still funny.  And of course, various forms of alternative rock bands were taking over our ears as they turned the rock paradigm upside down.  While many of the captains of the alt-rock ship burned out, faded away or ascended into icons, a few of them just maintained...continuing to release quality music every few years, mainly on their own terms.  One of those bands who remained as quietly as they entered is Built To Spill, the Boise based rock outfit who has been casually keeping the 90's alive for the 21st century.  Their latest record, When The Wind Forgets Your Name, calls back to some of the greatest aspects of nineties rock, and strongest points of this intriguing and elusive band.

Built To Spill is fronted by Doug Martsch, who is also the only permanent member of the band, with the rest of the crew changing between albums here and there.  He makes new Built To Spill records periodically, with fairly lengthy gaps between all their post millenia releases.  This level of autonomy makes Built To Spill albums feel like a true creative endeavor, rather than a work obligation; the songs and style curated to Martsch's tastes du jour.

After a string of noodly records; I wouldn't call them jammy, but...wandering, When The Wind Forgets Your Name is a return to form for classic Built To Spill alternative sound.  The album highlights the classic indie rock recipe of punk rawness mixed with classic rock studio production.  The result is a bit of a sludgier sound:  Slyly psychedelic, too gritty to be atmospheric psych and too hazy and sprawling to be stoner rock. The ambiguity that is the cruz of the alternative rock genre.

The band Martsch hired for this record fits his style well.  They highlight the razors edge between melancholy and uplifting songwriting that has long been his staple.  All members work through the fuzz with a precise emotiveness that allows listeners to appreciate both the rawness of the songs and the nuanced production.

As with anything with Built To Spill, It is difficult to say where Martsch will take the project following When The Wind Forgets Your Name.  It may be another five years before we hear from him again, and the band and sound may be completely altered.  But, this record will go down as a nice signpost for Martsch's DIY success through the nineties rock landscape...like you know, whatever.