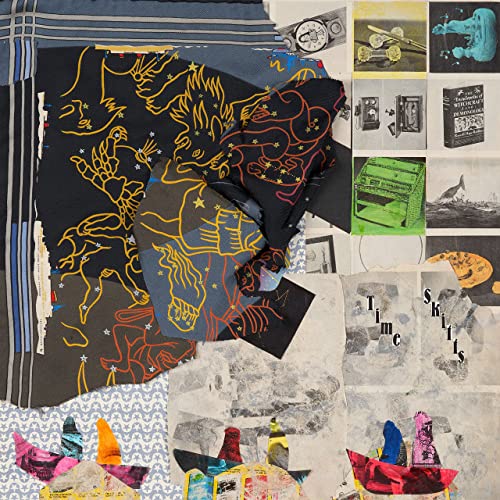 So, I listen to a lot of noise/post-rock, free jazz, and oddball psychedelic stuff... and still sometimes Animal Collective might be a bit much for me.  After their studio high-watermark, Merriweather Post Pavilion, the Maryland psychsters seemed to make a commitment to lean into the bedlam; creating albums engulfed in more and more chaos.  While the recent Animal Collectives aren't bad, they leaned into the heavier mayhem of the psychedelic experience, rather than the quiet lucidity of the journey.  Now, just as the first glimmers of a normal (whatever that is) world timidly peaks its way through the storm, Animal Collective emerge in 2022 with one of their better albums in years with Time Skiffs, a tranquil regression to the mean.

Time Skiffs opens with the dreamy "Dragon Slayer;" a lulling return to Animal Collective's best sound.  As the album unfolds it reveals itself as a proper culmination of Animal Collectives career.  The band takes bits and pieces from each 'phase' of their career and mixes cuts it with nods to their (specifically Avey Tare and Panda Bear's) solo work to create a blissful aural cocktail.  The band still pushes itself into the weird, but with way less force, creating an ethereal sound that is far more digestible than some of the band's more hostile takes on psych rock.  Time Skiffs relies more on fluidity and less on the jarring.  The songs are plenty playful, but less wacky and absurd.

That's not to say that there isn't plenty of looping, layering and thick sounds.  There is still a lot going in throughout Time Skiffs, and sometimes it can be kind of a lot to take in.  But for the most part, the rings, chimes and dings work in tandem rather than in competition, thereby manifesting the aforementioned calm and pleasantness.

While this record is a huge step in, what I would consider at least, the right direction, there is still a bit lacking in Time Skiffs.  The most iconic moments of this band lie not so much Animal Collective's texturing, but their ability to do so over exceptionally catchy hooks.  They were able to completely psychedelicize some very simple melodies.  While the breeziness of Time Skiffs is a wonderfully welcome surprise, there is a bit of unintentional aimlessness to it.  The nonchalantness of the record definitely beats out the chaos of the bands recent work, but still a ways away from the genius of the dosed out nursery rhymes of their mid-2000's glory-days.