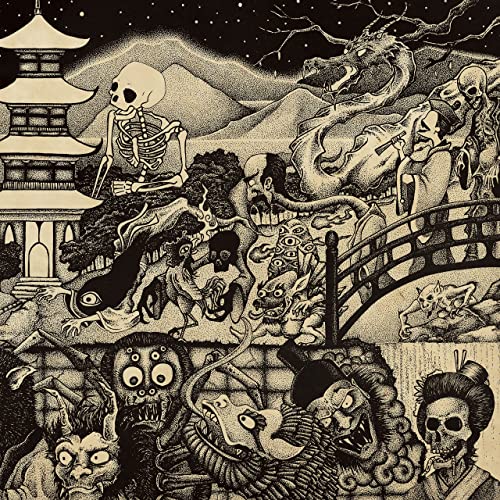 In the music world, "Psychedelic" is about as ambiguous as any other term in the industry.  It can be complex or dense or light, complex or atmospheric silence.  Essentially it can be easily reduced to any music that goes against the paradigm of song.  One band that tends to incorporate all these truisms is Earthless, a San Diego based metal trio who specialize in mind-expanding psych.  With their latest record, Night Parade Of One Hundred Demons, Earthless crashes into 2022 with quite an expansive treat.

After trying their hand at more traditional songwriting (relatively speaking, not in general), Night Parade sees Earthless return to what they do best; long ass psych metal.  Consisting of three songs and clocking in at just over an hour, the band covers a lot of ground.  The three pieces are not particularly connected, but certainly all live within the same sonic realm.   Earthless move from rapid-fire to spacious quickly, but fairly fluidly.  There are some spots where the transitions are a little clunky, but for the most part, Night Parade comes together as a singular statement.

Night Parade, a title which is taken from a Japanese folktale about demons killing and stealing people at night, has the dark and ominous overtones as the fable itself; the quiet parts are haunting and evocative and the raging segments sound captivating and dangerous.

The instrumental proficiency of all three members brightly come to fore on Night Parade, specifically as the drums and guitar, as they rush with a tangible sense of impending doom.  The guitar spirals with a heavy metal confidence and swagger that hits the listener like a finger in an electric socket.  With all that is going on throughout the album, there is little room for error, but all three are able to accent each other with a very tenuous organized chaos that comes together; still cohesive through its sinister disarray.

Earthless has an uncanny knack of being able to weave many ideas and sounds together without being particularly overwhelming; quite a feat considering how loud and menacing the record is as a whole.  But by the end of the final song, Night Parade Of One Hundred Demons ties itself up successfully, and captures the threatening essence of the fable that precipitated it, as the band manifested a tactfully artful piece.  The hard-charging trio is able to create an eerie set and setting that threads itself through the entire album, keeping thematic continuity throughout the cacophony of shifting noise, space and time.