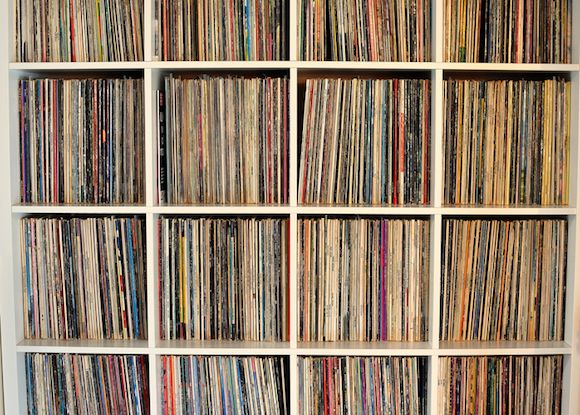 I have seen them around for years, but in the last few weeks they have been spreading more recursively than the virus that has predicated them:  The Top Ten Lists.  My Facebook Feed is currently loaded with posts about my friends most influential records...I can get behind this.  It is fun to see the sonic path of the folks I've shared my musical life with.  For many people, and definitely my people, music is a powerful personal identifier, and it is intriguing to see how they got where they are today.

With no further ado, I give you my top ten most influential albums. Something to keep in mind.  This is not a list of my favourite albums, although a few of them are.  These are the albums that have held the doors for me while I explored new musical worlds.

Nirvana, Nevermind:  The first album that really grabbed me.  My brother bought this CD when it came out, right when I was about eight; I heard some bits and pieces when I was still into Metallica and AC/DC.  The hook of Smells Like Teen Spirit grabbed me like no music has before.  It was the first time I wanted to explore everything a band was creating.

Led Zeppelin, ZOSO:  I went through a bit of a punk phase (by punk, I mean lower-upper-middle-class standards like Green Day and Offspring), and had little interest in rock and roll.  The opening chords of "Black Dog" was like a freight train that knocked me into classic rock fandom.  Probably the album that opened the most musical doors for me.

Bob Dylan, Highway 61 Revisited:  This album taught me that music doesn’t need to be over the top loud to be badass.  Someone could use words and an acoustic guitar and be just as powerful. This album is what really got me into Dylan; another of my all time favourite artists, and was the springboard for my buying into a lot of countercultural ideals and values that I still hold.  Would I have gotten into the Dead and Phish if I hadn’t gotten into Dylan???

Umphreys McGee, Greatest Hits Volume III:  Thinking about it now, maybe the most important album of my life.  My grandpa died when I like thirteen or so (he was old, so not a terribly sad occasion), and my cousin Casey and Ross came into town from South Bend, IN for the funeral .  Ross was driving me around in his car, and played me his friends band, Umphreys McGee.  I knew about Phish and the Grateful Dead, but didn't know that there were other bands like this.  I really liked them, but since I was still too young to understand or engage in underground music scenes, I just kind of forgot about them.

Maybe about two years later, I went with my friend Tim to buy pot from his sister's roommate, Arn.  Arn worked at the GameStop, and did fuck-all besides get high all day.  He did know good music, though, and when he found out I liked Phish, he asked if I had ever heard of Umphreys McGee.  I said "no", not realizing it was the same band my cousin played for me.  Once I heard a couple of key songs, I realized who it was, and went and bought their debut album, Greatest Hits Vol. III, at Crow's Nest (Joliet's last, and only, place to find independent music).  I fell it love with the band, and started following them around (seeing them more times than anyone besides Phish).  But their impact was far more lasting than that for me.  This was the band/album that introduced me to "the community," the endless amount of music in the world, and how important it is to go beyond the shelves of Target and Best-Buy.  There are scenes and cultures surrounding every sound!

Radiohead, Kid-A:  I remember this being a particularly challenging listen; I didn’t really get it at first.  It was assuredly one of the most complex albums I had listened to at the time.  It finally clicked for me, and at that point it was a masterpiece.   One of the most moody albums I have ever listened to, and no other album has captured the 21st Century zeitgeist the way Kid-A has.  This was also my first foray into electronic based music, and showed me that music can be both electronic and emotive to the human experience.

Miles Davis, Kind of Blue:  The first jazz album I ever really sat down and listened to.  It was a great example of soft modal jazz.  It was really cool.  As I dug further and further into jazz, there were albums that may have blown my mind more than Kind of Blue, but nothing that has given me that same immediate visceral reaction.

Flaming Lips, Yoshimi Battles the Pink Robots:  When this album came out, I was heavily into the jam band scene; not only was Phish back from hiatus (2002/2003), but a new crop of jammers came out that my friends I were heavily into (most notably, the aforementioned Umphreys McGee).  My friends and I saw Flaming Lips at Bonnaroo 03, and I immediately purchased their album at the merch stand the next day.  This album reminded me how amazing traditional verse-chorus-verse song structure can be.  Just stunningly beautiful songs.  This album also notes the textural psych rock aesthetic that will eventually dominate a lot of my ear-time.

The War on Drugs, Slave Ambient:  The album that officially converted my tie-dye into a flannel.  (For the Record:  I am obviously way cooler, and far more dynamic than that generalization).  This incredible album combining Americana song structure with psychy textural overlays opened up a new world of music for me, that I am still exploring to this date.  Beautiful record!