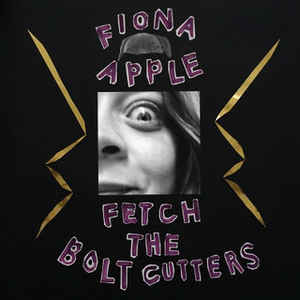 (Note:  I opted for Musing, rather than "Review," as this is the most acclaimed album in years.  There isn't much I can say that hasn't been said by a better critic, so I figured I would wax musical instead.)

It seems that Fiona Apple has always been a little ahead of her time.  She began her career as a teenager writing stunningly introspective music while the boyband and Britney craze plunged the depths of just how bad pop music can be.  As the world pushed into a new millennium, and Lou Pearlman literally and figuratively sodomized young music lovers, Apple has made a career doing things relatively on her own terms.  She apparently holds no obligations to put out records simply because it's been while; she is often completely out of the public eye for years prior to releasing an album.  She has a tendency to eschew marketing campaign ideas, giving lengthy speeches about the unimportance of pop music, and even lengthier album names (When the Pawn Hits the Conflicts He Thinks Like a King What He Knows Throws the Blows When He Goes to the Fight and He'll Win the Whole Thing 'fore He Enters the Ring There's No Body to Batter When Your Mind Is Your Might So When You Go Solo, You Hold Your Own Hand and Remember That Depth Is the Greatest of Heights and If You Know Where You Stand, Then You Know Where to Land and If You Fall It Won't Matter, Cuz You'll Know That You're Right).  Throughout the years, Apple has always followed the autonomous path, and did what she felt was sonically true.  Last week, she not only continued, but revolutionized that tradition by releasing the creative musical haymaker, Fetch the Bolt Cutters.

Fetch the Bolt Cutters is like nothing else; not only in terms of Fiona Apple, but in terms of mainstream music in general.  The music is the sound of her California home:  Her instruments are the walls, floors, and furniture that surround her, with odds-and ends (such as a box containing her dogs ashes) providing texture.  The album consists of almost zero tenets of popular music.  Fetch the Bolt Cutters is primal drumming and chants bowing over her own piano;  it is haunting, captivating, and absolutely beguiling.  Lyrically, it is typical Fiona Apple with some added maturity peppered throughout.  She has an uncanny knack of balancing humour with gravitas, empowerment with vulnerability, the abstract with the extremely concrete.  This album has all the eccentricities of a true work of art, and is a creative spire atop an exceptionally well built career.

This record is the real deal; it lives up to the preceding hype and subsequent recognition.  I can confidently say, in April, that this will be the "Album of the Year" for 2020.  It really is that great.  But....

Is Fetch the Bolt Cutters a great album?  I don't mean great like "Yea, man!  That's a great album!."  It is.  I mean, is this going to be an album that we (the collective music nerds of the world) revisit and tout as a benchmark of an era?  Will this be a new baseline for musical comparison, or a one-off lightning bolt of genius made more poignant by our own Covid-19 relatability; after all, this record is written by someone tethered within the four walls of her home, making music with the same "what's around" ethos that we all now make our dinners.

A music geek listening to Fetch the Bolt Cutters is a bit like a kid going to the Disney World for the first time; there is so much wonder, the senses don't really know where to go.  It is something so unique that the only thing to do is widen your eyes, and "oooh" and "ahh" to the newness.   But, in twenty years, will Fetch the Bolt Cutters be like going to Disney World for the umpteenth time?; full of long lines, overpriced throwaway souvenirs, and screaming children only occasionally drowned out by their screaming parents.

When I look back at the great albums of the 21st Century (and of all-time), I look at them like Norm's stool at "Cheers."  There was obviously something that grabbed his attention the first time he walked through the doors; enough to come back a second time, but vibe and style keeps him coming back forever, with the same excitement as the first.  The great albums provide a comfort; they don't eventually grow tiresome and predictable, but perpetually provide new sonic conversations. When Yankee Hotel Foxtrot starts spinning on my turntable, I can hear Jeff Tweedy casually saying "Hey, Chigs," a la Sam Malone:  When listening to Kid-A, I know that Thom Yorke will wipe up after I spill my drink raving about how beautiful "Morning Bell" sounds on vinyl.

Album Grade:  Incredible!  Get back to me in a few years.