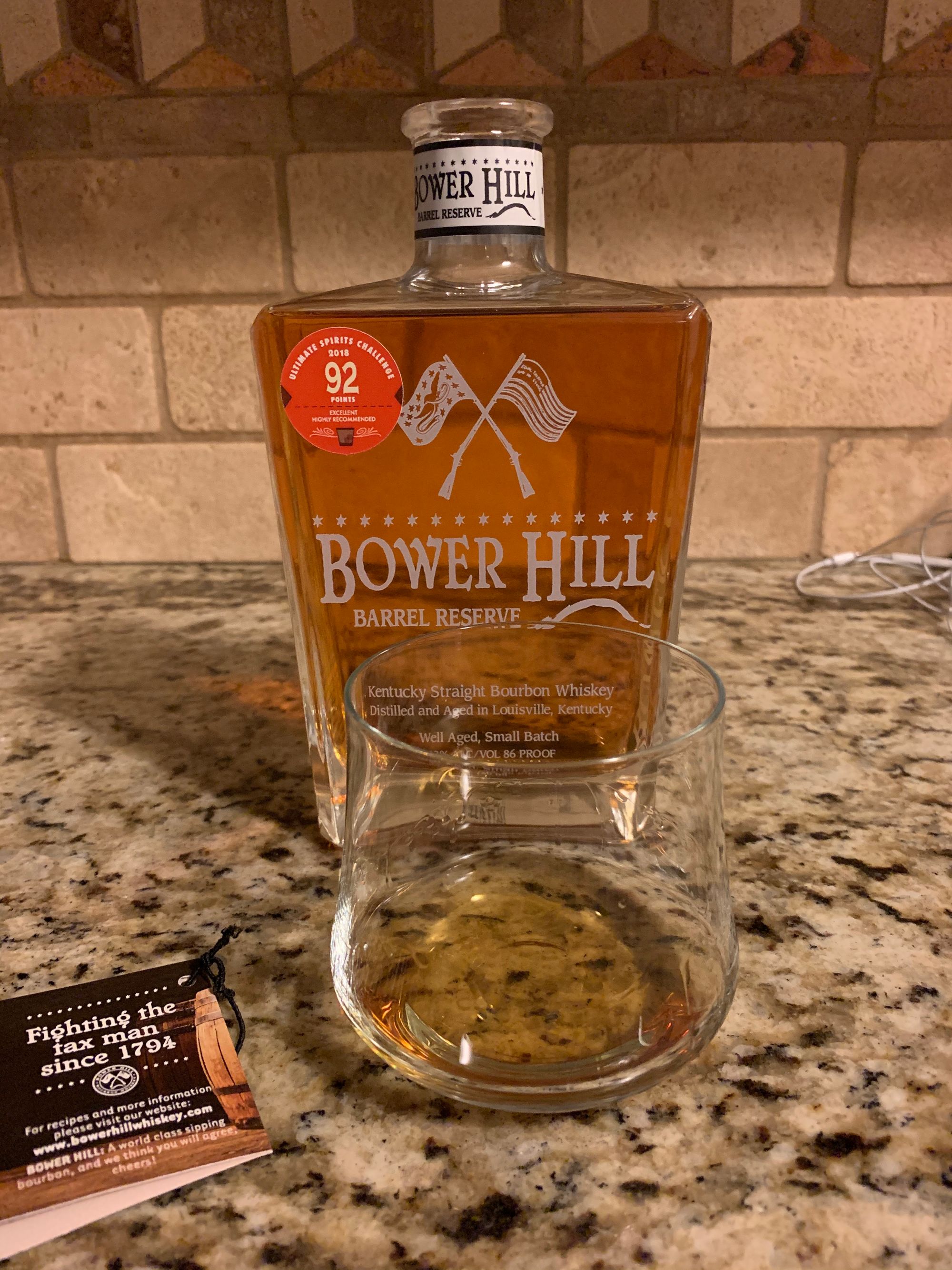 Today I'm drinking Bower Hill Barrel Reserve. Very first impressions– I usually go by how many bottles are left on the shelf, and this was fully in-stock... not usually a great sign. Second impressions weren't much better when I found a plastic cork– which is just meaningless packaging really but something you notice when you've tried a few higher-end bourbons, ahem. In any case, in spite of first impressions I never judge a book by its cover, or a bourbon by anything but its taste; perhaps if anything this label promises to be different. Without further ado let's get to tasting!

Off the bat the color looks good– a very nice rich gold color– on the paler side for bourbon, which tends to usually be a good sign for me, as I've stated before I prefer something with more subtlety. Legs on it seem pretty thin and run quickly– apparently an indication of age and strength– meaning the age and strength of this whiskey are both on the low side. Which again, all this doesn't sound bad to my palate, I tend to like mellower flavors– although it surely ain't no OGD114 in terms of getting your party started.

Smell is nice, subtly oaky with pretty clear vanilla overtones– no astringency– I could just hook this up to a respirator and huff it all day– not kidding. Not super smokey, again as a straight bourbon guy I don't mind this– it's not like the Micther's US*1 I reviewed last time that had a subtle sort of scotch-esque smell. The Bower Hill isn't overly grainy or corny either– it really does hold it's own against higher tier bourbon in my estimation so far.

Now finally to the important part: the long and winding road to the bottom of my gullet. Very smooth, very mellow, very much what I expected from the foreplay– though in the back of my nose after tasting I can pick up the slightest hint of smokiness. Has a good balance to it in terms of the main flavor components– the corn and grain aren't bold– which is what you ultimately want– and it doesn't cover for a mild body with overwhelming woodiness (like beam or jack).

One of my biggest turnoffs for bourbon is a shitty aftertaste. I don't know why some have more than others but it's a fact: some bourbons wither on your palate like a pile of dog shit. In any case the aftertaste and general mouthfeel of this bourbon is quite nice– if maybe just tiny tiny bit on the watery side but I can accept that.

My memory sucks in general but I like to think it's nearly photographic for bourbon– to me this really compares similarly to the Barrell Bourbon I reviewed a few weeks ago– which is more than double the price. I am highly pleased with my unconventional choice today, and I am 100% certain that this bottle will rejoin my collection again soon.

Verdict: What do you have to lose?