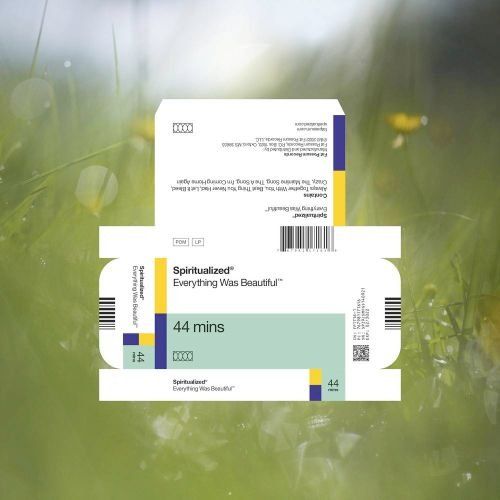 In the trendy and principally progressive world of indie rock, familiarity often breeds contempt.  Then, there is Spiritualized.

For over thirty years, Jason Pierce (AKA:  J. Spaceman.  AKA:  Spiritualized) has been essentially writing the same song. He has drawn his timeless blueprint on the shoegaze paradigm of hazy and hushed guitars, lush textural swells, and stoney formlessness; fusing it with his fondness for rock, drone, jazz and some spaghetti western to fabricate his own post rock sub-genre.  Spiritualized (of whom Pierce is the only sole member) is the conductor his own astronautical orchestra.   While the ethos of each of the nine Spiritualized albums remain constant, some are more judiciously arranged and produced than others... with that Pierce put forth an excellent effort and execution with his latest release Everything Was Beautiful.

Everything Was Beautiful is a clear counterpart to its predecessor And Nothing Hurt (Note the wink towards Vonnegut).  There aren't many surprises on the record, all the same desired tenets of the Spiritualized catalog come through handily.  Everything Was Beautiful incorporates the medicated drones and swells of sound; an army of instruments, not so much mashing as as delicately linking together into a singular polyphonic unit. The record opens with "Always Together With You."  Opaquely blanketed with instruments ( I think about sixteen) and various lead and backing vocals, the  perfectly captures Pierce and Co's maximalist glory.  The albums proceeds in this vein, with big vocals and rock instruments, propelled by curtains of brass instruments.  The inclusion of audiophile noises add a post-rock industrial quality, as well as further push the textures that jut out from the overall wall-of-sound.

"The Mainline Song" is probably the best overall descriptor of the Everything Was Beautiful. Filled to the brim with bells, brass and choral hymns, it ascends quickly and doesn't let up until it reaches a sprawling catharsis.  The song's power and poignancy perfectly encapsulates the entire mission statement of Spiritualized.  The album concludes in grand fashion with "I'm Coming Home Again,"  (Note: Link is a live version) a song that perfectly bridges jangly guitars, electrical fuzz and flowing jazz to create a haunting and beatific bookend to Everything Was Beautiful.

Again there is nothing on this record that is particularly unexpected or tangential to the band's stamp.  And with a different band, and a different sound, Everything Was Beautiful would likely be considered a repetitive flop, but for Jason Pierce and Spiritualize, it it feels like a welcome homecoming; an antiquity brought back to us from his latest voyage into the ether.