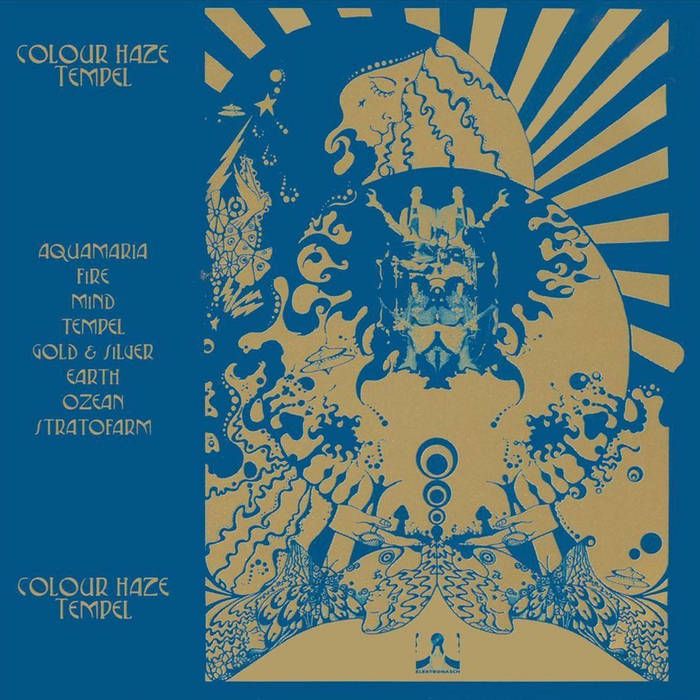 The year is 2006, and the Psych-Rock Renaissance is still almost a decade away.  However, out in Germany, a stoner-rock power trio named Colour Haze are making waves with their fuzzy release, Tempel.

Tempel was released in an era when stoner-rock was making its own big comeback.  Influenced by 90's California pioneers like Sleep and Kyuss, the early aughts found US bands like Queens of the Stone Age and Mastodon filling venues with ominous curtains of distorted guitar.  Across the pond, bands and fans quickly adopted the new(ish) genre as well.

One of those bands was Colour Haze, whose trajectory changed in 2006 with the release of Tempel.  Tempel was not only influenced by the stoner rock that the band was founded upon but the bourgeoning indie and psychedelic trends as well.  Tempel still has plenty of the sludginess for stoner rock fans to sink their teeth into, but there is a nuance within the record that much of the genre lacks; a certain soft refinement.  The record opens with the languid journey of "Aquamaria," a clear statement of the sound of their record, and new direction of the band.  The fuzz is definitely there, but there is an element of pleasant noodling that gives the tune a little extra textural dynamism. The rest of the record follows this same approach, where instead of a curtain of sound, there are waves and swells between periods of sparseness. Songs like "Fire" begin with a haunting and ominous emptiness before building to a high-octane riffy peak, highlight Colour Haze's ability find a groove through the grit:  Stoner Rock with melody!

Where as distortion is the primary tool for many stoner rock bands, Colour Haze utilizes lot of reverb and phase throughout Tempel; something that may not seem like a big deal now, but it is a primary tenet of the ne0-psychedelic sound that hit the scene soon after Tempel's release.  Songs like the drifting and warmly meditative "Ozean" explore vast terrains that just can't be seen through the opaqueness of a wall-of-sound.

While Colour Haze seems to be leading the charge in regards to progressive genre-bending, they certainly have no issues paying homage to the stoner rock pioneers. Songs like the laid back rocker "Gold and Silver" would comfortably fit in blaring out of a shag-carpet van or a party at the moon-tower.

Between Colour Haze's lack of commercial viability, and that they never distributed their records in the US, much of their work is largely unexplored.  Shame, because these psychonaut pioneers are covertly critical to a scene that has since flourished.  Hopefully, between the availability via streaming services and the increasing number of crate-diggers, Colour Haze and their landmark Tempel will get the psychedelic accolades they deserve.