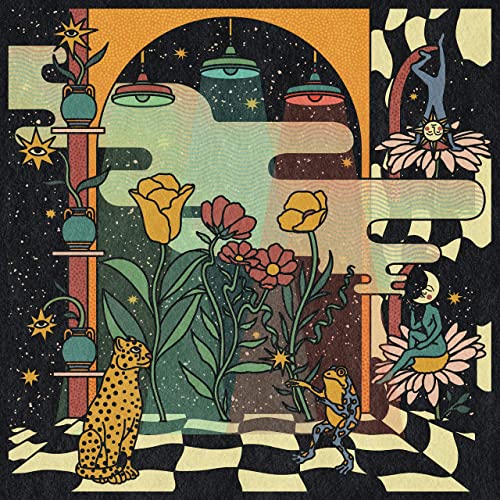 One of my many favourite parts of the recent improvisational psych renaissance is the indelible respect and collaboration between the artists.    Throughout the last few years, it was par for the course to walk into a club to find troupes of semi-famous (if not niche) psych rockers joining forces to create powerful music on the fly.  With the growth of Bandcamp and DIY indie labels, we are lucky enough to have high-quality access to many of these performances.  The most recent of these experimental collaborative releases is Deep Fried Grandeur, by Ryley Walker and Kikagaku Moyo.

Deep Fried Grandeur was conceived at the 2018 Le Guess Who Festival, a Netherlands based festival celebrating various forms of experimental music.   The festival organizers asked Walker, a self-deprecating and quirky NYC via Chicago  psych/folk/jazz/whatever guitarists to pick another act for his band to jam with for a set.   Walker wasted no time picking Kikagaku Moyo, the Tokyo Psych band making kaleidoscopic waves throughout the Western psych-rock scene.  The pair are a perfect union, as both Walker and KM's style share the same gentle bedlam; like ambling through a flowery labyrinth.  The path is a little disorienting, but payoff lies in the pleasant enjoyment of the walk.

The set was comprised of about Forty minutes of improvisational jamming, with a handful of different movements.  The resulting Deep Fried Grandeur record was split into two "songs," fairly arbitrarily for LP purposes.  The delineation works however, as the listener can enjoy each passage, half, or whole as its own sprawling psychedelic narrative.

Walker states about Deep Fried Grandeur, "We had an afternoon of rehearsal and it mostly just drinking espresso, smoking cigs and saying 'man, we'll be fine.'"  There was not a lot of preparation for the jam.  Combine this with the sheer magnitude of musicians (there were nine! people onstage), and this project had the potential to be a chaotic failure:  A sonic house-of-cards.  However, Ryley Walker was right:  They were MORE than fine.  Each band's mutual respect for one-another, along with their firm grip on the tenets of psych-rock, allowed for each instrument to delicately work with one-another.  Each person dropped in and out with such seamless unity.  Make no mistake, there is a lot of sound, but everyone had enough tact to not make the jam sound busy or haphazardly executed.  The band works together to navigate psychedelic waters, making their way through blossoming swells and and hypnotic whirlpools.

True to the ethos of the project, and the Festival, Deep Fried Grandeur leans heavily into its open-endedness.  This album isn't psych-101 where traditional songs have reverb laden effects; Deep Fried Grandeur fully celebrates the mind-bending formlessness of the psychedelic soundtrack.  The record isn't a necessarily challenging or abrasive listen, in fact it's often incredibly soothing and mesmeric.  But the lack of a verse-chorus-verse anchor might be a little too untethered for those new or ambivalent to improvisational psychedelic music.  However, for those fans who are able to let go and enjoy the ride, Deep Fried Grandeur is an expansive and mind-blowing trip.

Album Grade:  These are two of my favourite touring acts, so YEA!