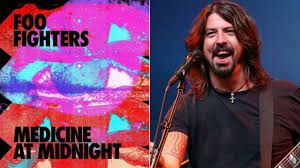 There are few musicians as likeable as Dave Grohl.  Even if you hate the Foo Fighters, it is hard to not be drawn to Grohl's charisma.  He has fun; in an industry sopping with brooding histrionics, Grohl knows how blessed he is.  His current band was able to sneak into celebrity right before ClearChannel and the streaming services decimated rock and roll. Let's also not forget the flannel-laden elephant in the room regarding the constant royalty stream from his past work.

Dave Grohl and the Foo Fighters have taken it upon themselves to be the ambassadors of rock and roll, and with lighters flickering, will die on that hill.  In own way it is incredibly refreshing.  For the past thirty(ish) years, since Grohl's other band (you may have heard of them) made it okay for rock music to be sensitive and vulnerable, the entire rock genre has undergone an evolution of consciousness.  This is absolutely a positive thing; it has lead to music having more genuine truth, and far less cliches.   But, not every musical experience needs to be an overtly emotional or intellectual experience...sometimes you just want to fucking rock.  Foo Fighters are the Pied Pipers of letting your hair down and having some distorted, major-chord fun.

On the other hand, it is not refreshing: in fact, it can grow to be quite stale.  Part of Foo Fighters staying true to rockin' and a rollin' is knowing their lane, and Grohl understands this.  Foo Fighters have carved a successful niche for themselves making music almost exclusively designed to fill stadiums.   The Foo Fighters can follow their own recipe to mint one platinum album after another, with fairly minimal effort.  Their latest release, Medicine at Midnight, offers the same feel-good riffing and familiar terrain one would expect with a Foo Fighters album.  No alarms, and no surprises.

While the album was being recorded and mixed, Grohl referred to it as the Foo Fighters' "party album."  He isn't wrong, it is the most upbeat record the band has ever recorded.  Some funky guitar riffs and drum loops pepper the album, and that might get your head moving a bit.   The album is...a Foo Fighters album:  Three parts stadium shaking power rock and one part banal ballads. All the platitudes from their other albums.  There are no shortage of easily digestible earworm choruses to get fists pumping at their shows.

In the end, though, Medicine at Midnight falls short, even by the standards they set.  The album simply lacks the hooks or the big moments, and the songs on this album will more than likely be set to the side, buried under better songs in their catalog that follow the exact same paradigm.  It's kind of funny, because it seems like Grohl uses all his creativity for the recording process (For example, each song on Sonic Highways was recorded in a different musically rich city, and influenced by its culture) rather than the actual music.  Are the Foo Fighters a marketing machine, or a rock band?

The best review I can give to Medicine at Midnight is that I have run out of things to say.  It is the same Foo Fighters record you have heard before, and will hear again on their next record.

Dave Grohl is still one of the coolest MF'ers on the planet, but Medicine at Midnight just isn't.

Album Grade:  I would love to sit down with Dave Grohl and talk about other music, but not this album.  Nah.