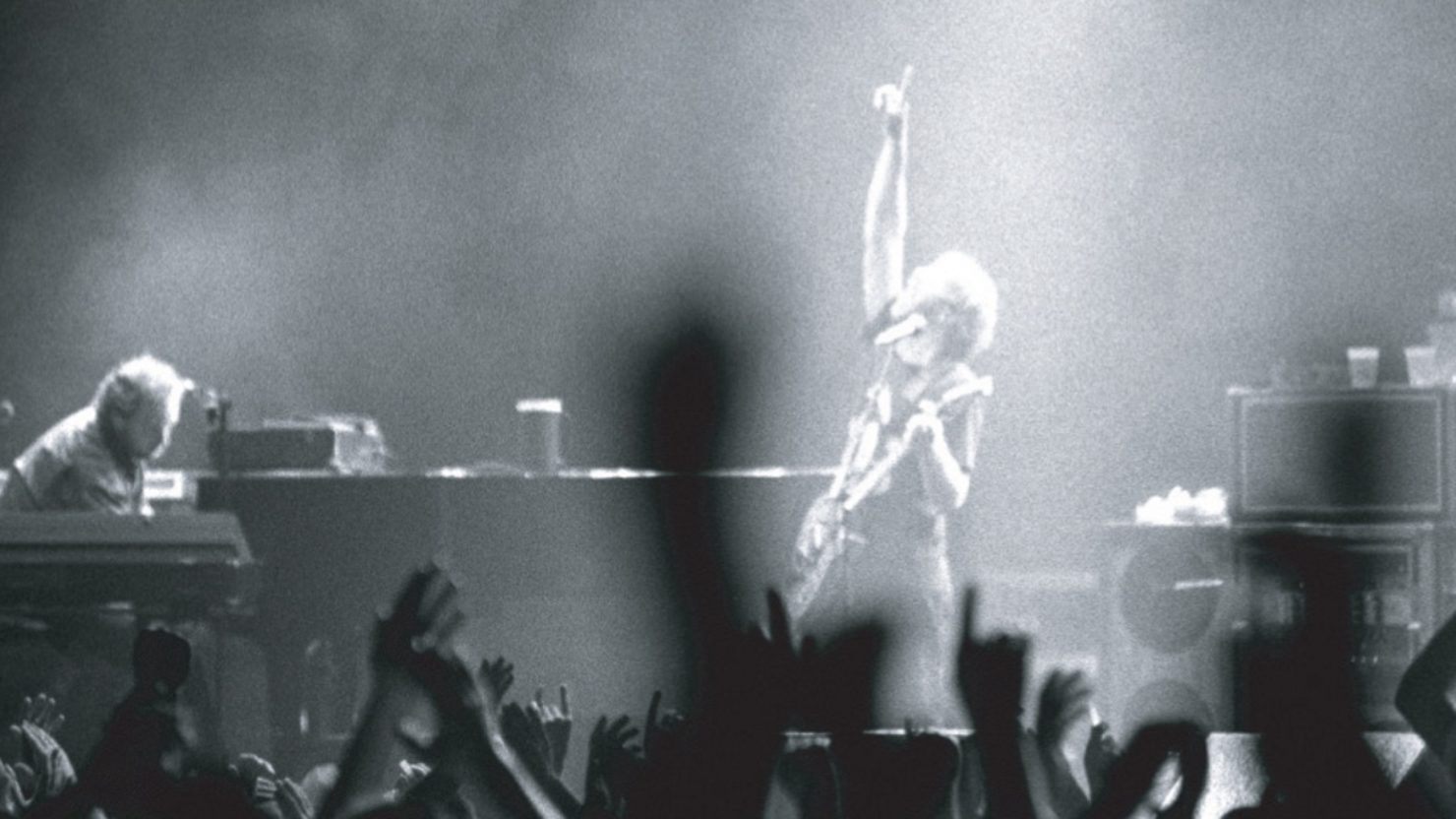 After taking Long Island around the world and back the two previous nights, expectations and excitement were undoubtedly running high in Providence. It was now clear that fans were seeing Phish enter a creative and exploratory high-point in their career– and people needed to witness it for themselves. Fans crowded into Providence Civic Center, the arena famous for the eerie and edgy “Providence Bowie,” ready to capture that same lightning in a bottle. Simply put: Phish came through again!

The lights went down and the celebrated notes of "Tweezer" rang out through the arena; the band wasted no time in the shallow end of the pool. The Tweezer jam began with Mike leading the band into a slow funk jam, reminiscent of those Fall '97 bangers. As loops and effects wrapped themselves around the groove, Trey sprang into action, guiding the band into a frenetic peak before dissolving back down into the opening notes of "Taste." Pure magic...one song in, and they have already hit that place; HOSE. After great full band interplay in "Taste," the band settled into some standards– most notably a strong "Limb by Limb," before closing out the first set.

The second set began with the opening drums of "Birds of a Feather." Just the second time ever played, the new song wasted no time asserting dominance. With Fishman's drums keeping the jam pumping at a consistent pace, the band weaved together several different musical ideas and sonic themes. An absolutely shining example of the band's communication throughout the run the "Birds" jam rose and fell like the tides; a single body of water moving together.

As "Birds" returned back into its song, an eerie effect from Page signalled the opening of "2001." As the band took extra patience cooking a primordial soup, it was becoming clear that this was not-your-average "2001." They continued to tinker with the opening melody of (their version of) "2001," adding spacey effects and textural soundscapes. Trey employed more of the loops and noodles, while Page added some free form keys (which sound really fucking good in quality headphones). The band was slowly lifting the crowd into their trip. About nine minutes in, and Trey unleashes his guitar, leading the charge into the most aggressive version of the song to date. With Trey unleashing flames all over the arena, the band finally (at around twelve minutes) launches into the familiar "2001" licks. After it's first go-around, Trey drops us into a dirty space funk groove.

The ultimate dance-party, segueing into a rare 2nd set "Brother," via quiet vocal jam. This isn't just any "Brother," though... this is the Island Tour "Brother." After it's standard break-neck soloing, the band lays back into another funky groove, where it bounces along for several minutes, before jetting off into dark and dissonant psychedelia; no leader of the jam, just that pool of Phish. The band worked their way back into the song proper to finish off the song, and the earth shattering segment. WOW.

After a brief comedy routine, the band blasts right back into space with "Ghost."A very underrated version, this version featured dark interplay between each member, as the band patiently let the jam develop on its own. They ebbed and flowed in unison, and found their way into "The Blues Brothers Theme." Harkening back to their tease during the 1997 NYE Run; the theme dissipated into the opening notes of the fan-favorite, "Lizards."

The beautiful "Lizards" allowed just enough time to get their bearings before being shot back into the darkness with an eerie and intense "David Bowie" to close the set. Phew. What the fuck was that? Another set of incredible jamming that took the audience to the outer edges of music and back. Not being one to leave their fans hanging, the band came out and eased Providence back into reality with a sublime and celebratory "Harry Hood," capping off an evil and intense night of music. WOW!!!!

Home Stretch!  Phish has spent the last six sets exceeding expectations, and exploring unknown realms of musical explorations.  For the finale, fans knew the limitless possibilities that the Island Tour could bring, and were ready to dance this unique experience into Phishtory.

All three shows saw big openings, and this was no different.  After a fun "Oh Kee Pah" to cleanse the palate, the band dove right into their quintessential jam vehicle "You Enjoy Myself."  Usually saved for deep into the show, this early placement was the band's way of letting the arena know that they were leaving everything on the field; there is no cool-down during the Island Tour. Despite being first set, this "YEM" went deep.  The jam opened with a seriously funky groove, providing the perfect pathway for Trey's lead guitar to soar into a frenzied solo before rolling back down into a funky bass outro (and standard vocal jam).  Just like the other nights, the cards were thrown down early.

After a standard "Theme from the Bottom" the band segued into a gorgeous and serene rendition of "McGrupp and Watchful Hosemasters," which featured some subtle and tactful interplay between all four members.  "McGrupp's" loungey conclusion transitioned nicely into the opening notes of "Bathtub Gin," and although this version didn't stretch out, it covered a lot of musical ground before stumbling their way into a top shelf "Cities." After a clunky start to the  Talking Heads cover , Phish recovered with several variations to the composition, adding a bit of dynamism to the tune before liquifying into an ambient but danceable bass groove.  The band was able to close the first set with a dark and maniacal "Split Open and Melt," which featured incredible extrasensory communication; each member sharing minor mode playing, carefullyfilling space in each others playing... a basketweave of sonic exploration.

With one frame left, Phish walked to the stage ready to put a capstone on this seminal run.  The opening "Down with Disease" wasted no time jetting into the improvisational stratosphere by exploring dirty rock before settling into pastoral ambiance.  Following the "Disease," the band launched into "YaMar;" a highly suspect song placement given its lighthearted aesthetic.  What followed, however, was little short of magic:  Following the structured portion of the jam, Trey went into an incendiary guitar solo.  Loaded with both delicacy and confidence, Anastasio worked his way through sprightly brilliance as the rest of the band sat back to let the magic flow...one of the most breathtaking and emotional moments of the run.  After a few minutes of just Trey, the band slowly rejoined to create a stunningly beautiful and patient transition into "Prince Caspian."  This is HOSE!!!!

"Caspian" can often be an overlooked jam vehicle, this rendition hit an exhilarating release before settling into a brief atmospheric plane. The perfect catharsis following the "YaMar" solo, "Caspian" didn't stray to far into the ether, but was perfectly placed, and masterfully played.  As the band wrapped up "Caspian," Fishman's drum intro to "Maze" can be heard through the transition.  "Maze" rolled along nicely, but prior to the standard solo, the band called a huge audible, diving directly into"Shafty." Another debut of the weekend,"Shafty's" low funk groove proved the perfect passageway into a rocking "Possum." In most cases, "Possum" would have been a raucous set closer, but not Island Tour.  "Possum"  stopped on a dime, and from the dust arose the gooiest funk jam of the weekend.  Slow and patient, the jam summoned up the entire mood of the weekend...just incredible improvisation; all four members communicating in the dankest improvisational swamp.  From the murk came Trey's now legendary speech:

"So it’s getting near the end of this little four day run. It’s been really fun, and its kind of weird having to stop after four days…And I started this little funk groove because we can’t end this whole thing without a little bit more funk, since that’s kinda been the theme.  So for those of you want to take off, take off, but for those of you who want to just dance to the funk, we’re gonna stay around and keep grooving."

From the bubbling cauldron of sound came the slowest, funkiest "Cavern" of all time.  Arguably Phish's funkiest moment of their career, this "Cavern" oozed along like molasses as the crowd's roars levitated the arena.  "Cavern" climbed to its peak before a drum solo capped the instant classic, and a run that will live on throughout time.  This is Phish.

Plain and simple, this is Phish at their best. Throughout the rest of their career they have continued to wow their constituents with otherworldly levels of improvisation, but this moment will likely never be topped.   Listening back, there is a communal energy surrounding the shows; a symbiotic journey where both the band and the audience were passengers while the music steered the ship.  There has never been a more musically comprehensive and innovative run of Phish performances before, or since The Island Tour.  There are several different terms Phish fans use to describe the indescribable Peak Phish experience, and this was all of them.  This was IT.  This was the HOSE.  This was why we do this.  This is The Island Tour.