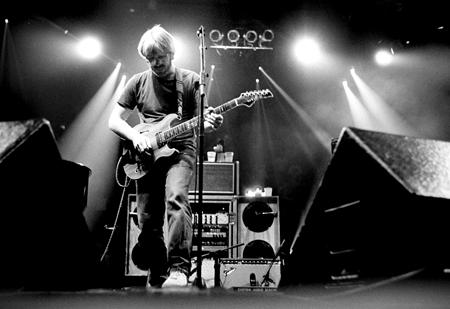 In March of 1998, fans were treated to an announcement that Phish was going to be playing a run of four shows on the East Coast. Dubbed the "Island Tour" (Rhode Island and Long Island), there was lots of anticipation as to what these surprise shows would bring.

Phish was fresh off their now infamous Fall '97 tour and subsequent New Years '97 run at Madison Square Garden. While the entire year was a game changer, these tours drastically changed the trajectory of the band– opening of a new style of "groovedelic" rock that allowed the band to explore endless boundaries through open-ended groove-based jamming; a methodology that gave every song the potential to go anywhere. Think of Grateful Dead improvisation with a much tighter technical song framework– not to say it lacks that same eccentricity.

People packed in to the Nassau Coliseum on April 2nd, ready to hear the continuation of Phish’s most recent career watermark. Little did they know they were in for eight sets of unparalleled energy and improvisational creativity. In this two part series, we will take a look back at highlights from each show, through the eyes of a fan who was too young to be there.

Fans were raring to go as they packed into this dingy hockey arena; one that ubiquitously vibes with East Coast Phish. When the lights went down and the opening notes of “Tube” began, all of Nassau knew that we were in for something special. As the “Tube” continued on its funky path– fresh off the most recent spectacular outings in Dayton and NYC the previous winter– it was becoming evident that the band was even looser than they were previously; they employed loops to their funky grooves, creating textured psychedelic swells of music.

After a couple of fun standards, Phish gave us our first real taste of the weekend to come with a killer “Stash.” The jam started with a Trey led guitar peak that grew in intensity….like really grew. Just when the jam hit its boil, the band simmers to a slow, serene passage of airy melodies. It really was phenomenal; the band turned together on a dime, and completely changed the trajectory of the improv into a lengthy and thoughtful improvisational masterpiece, experimenting with the space that would eventually come to define their sound this year. The band delicately steered their ship into the first heavyweight of the run. Phish then proceeded to close the set with a couple of standards, including a “Chalkdust Torture” that had quite a bit of oomph.

No momentum was lost in the second set as the band launched into a couple of high energy rockers and the debut of “Birds of a Feather” (will discuss more during Providence). The opening notes of “Wolfman’s Brother” signaled (outside of Stash) the beginning of the Island Tour vibe. The gooey funk of "Wolfman’s" segued its way into Phish’s cover of “Sneakin’ Sally Through the Alley.” Following the end of the song proper, the band launched into an extra funky jam. It was a sort of spacey funk with a touch of atmospherics, building off the sound the band cultivated throughout the previous year. After segueing in and out of another debut, “Frankie Sez,” the band hit the beginning notes of “Twist.” Often revered as one of the GOAT’s, this version involved a few minutes of awesome guitar wankery before lifting off into the stratosphere. This “Twist” is the definition of hose; deliberately building from an ambient soundscape into a lush textural groove; a scary and blissful representation of what 1998 had in store for Phish. The band communicated masterfully as they weaved their way through several movements and themes during the “Twist” jam, not only pushing themselves, but the audience-challenging the norms of what music really can be. The band eventually came back from the jam, landing back to earth to end their evening. The folks in the building saw some truly inspired music– but little did they know the best was yet to come.

Phish wasted no time reigniting the energy from the previous night's show, with a seething version of “Mike’s Song.” Phish fans are plainly aware that each show is different– and nothing is certain– but when they opened with a “Mikes,” it’s going to be a heater! “Mikes” followed their new formula of funk and psych, before segueing out. The segue was bookended by a fantastic “Weekapaug Groove,” which explored throbbing funk before hitting a rocking peak, stemming from “Crosseyed and Painless” tease. The fact that they were this engaged this early in the show is a serious sign of foreshadowing. The band whipped through the rest of the set with some standards, and a nicely played Reba.

After their standard set break Phish walked back onstage, ready to give what is arguably the best set of music in their 37 year career. They opened with “Roses Are Free,” a song only tinkered with a couple of times during the Fall of ’97. What happened during this version has widely been regarded as one of Phish’s greatest jams of all time. The band collectively worked their way through multiple passages, going from a minor mode funk, into spacey ambience, into ethereal formlessness. The definition of “Hose" (Santana's description of Phish's music giving life to the audience), the band is a singular entity, one unit pivoting together to explore the boundaries of music. There was no leader directing the jam or framework to build from, just an amoebic pool of sound– a living breathing thing.

As Phish veered further away from structure, the opening notes of “Piper” presented themselves. This rendition of “Piper” begins with a beautiful slow build (something sorely lacking from the modern day structure of the song), after ripping through “Piper” proper, Phish lands on the final coda– another facet of the song that is often missing in it’s current incarnation. The coda reopened the dimension created from the “Roses” jam, exploring a contemplative atmosphere via a sparse groove; delicately lifting the crowd into space. They remain in the ether for several minutes before lowering back down into song… this is what Phish is all about! The resulting "Roses-Piper" had all the same parts of the fabled Fall '97, but with more minimalistic grooves.

While their groove based "Cowfunk" toyed with the idea of ambient space, this new 1998 Phish used it as an instrument. The band worked together to build off of the idea they started on Halloween 1996 (the Talking Heads show, and the first time they really experimented with groove-based jamming), and created a new style of improvisation that worked through textured soundscapes. Phish were creating waves of sound and space, creating the soundtracks for "interdimensional", a style that the band would regularly employ until their hiatus.

The S.S. Nassau returned home without injury, and it was time to celebrate, in the form of a highly energetic “Loving Cup.” The raucous Stones cover was the perfect catharsis after such high-level and abstract segment. As the band shredded through the song, a naked man jumped onstage before getting tackled by Pete Carini, Fishman's drum tech. What followed was a fun and funky “Run Like an Antelope” with “Carini’s gonna get you” harmonization to close out the set. As evidenced by Trey’s cocky strut in the encore ending “Tweezer Reprise,” the band were immortal this night; completely taking hold of the minds and legs of the audience.

Murder Most Foul and the Ballad