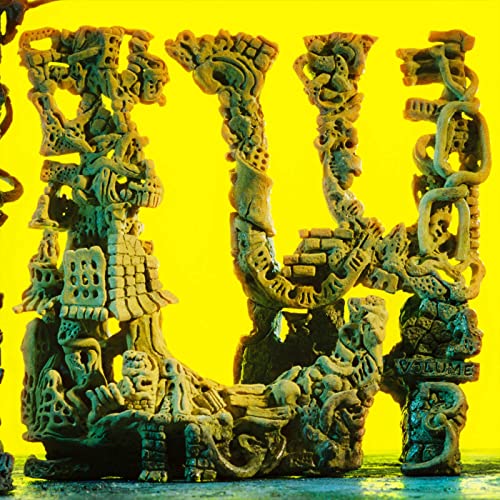 This is a mini-review because this album bookends it's predecessor, and most of what could be said about KG can also be said about LW.

King Gizzard and the Lizard Wizard are really something else.  They are at a level of production that few other musicians can muster.   But it's hasn't only been their volume that impresses, but more their content.  They are a psychedelic Midas, manufacturing gold whenever they pick up their instruments.  No rest for the weary, the Aussie Psych rockers fill the few moments between records with a full schedule of rip-shit live performances.  One would think that the tank would eventually empty, but with the release of LW, the band's 17th studio album in nine years, King Gizzard and the Lizard Wizard show no signs of slowing down.

LW picks up where it's predecessor, KG, leaves off.   It was recorded during the same remote sessions, and has a very similar sonic feel to it.   It is the their third album experimenting with microtones (the notes between the notes), and despite the music being all over the map, by King Gizzard standards at least, the microtonal guitar is what most comes to the fore, and the musical component that keeps LW a cohesive and singular entity.

Like KG, LW was not recorded in King Gizzy's typical lo-fi, buncha dudes jamming in a room, style.  The music was all recorded and submitted from their own studios.  The recording limitation fundamentally makes the sessions less spontaneous, and why these two albums are probably the most musically diverse.  There is simply a lot more preparation to these records than their others; ones that see the band doing a deep exploration of a particular sub-genre of psych rock. LW is still wonderfully executed, however, as it feels complete and well-thought.  It does not feel like a compilation album, or a hodgepodge of unrelated ideas.

LW opens with funky surprise in "If Not Now, then When,"showing the bands chops as a loungey dance act.  From their, the album expectedly leans heavily in the band's psych tendencies, with varying degrees of traditional rock and non-western aesthetic.  "O.N.E." stands out with it's driving guitar surging over bongo's; a great juxtaposition that highlights the complexity of the band.  "Static Electricity" is a dazzling psych jam that begins calmly with acoustic microtones before building into a frenetic peak.  LW weaves through hordes of mind-bending ideas before arriving at "K.G.L.W.", an expansive and sludgy conclusion that harkens back to the opening track of KG, and seamlessly ties in all the ideas of the two albums into a raucous cacophony.  A capstone on the K.G.L.W. experiment.

God only knows what bullets are left in the King Gizzard chamber; there is obviously no shortage of ideas.  As the band moves forward, there is a better than good chance that King Gizzard will be a buncha dudes jamming in a room together again; and while we happily look forward to that, we also can be thankful their last two albums were very pleasant and engaging surprises, great listens for rookies and veterans of King Gizzard and the Lizard Wizard, and that the music they make continues to move the needle of psych rock.