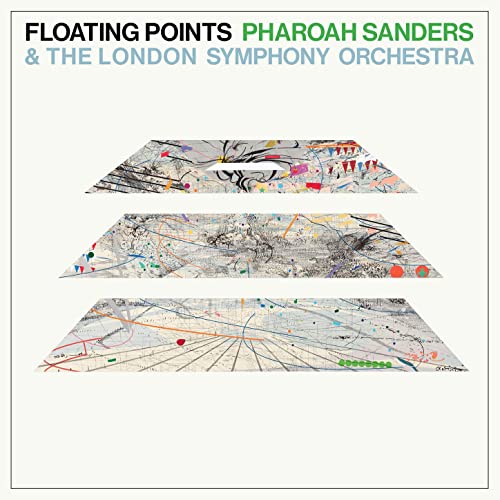 The beauty of ambient music is its ability to subtly weave itself into the world around it. As if the aural accoutrement has a worthy place within its context; it belongs there.  Three titans put took the ambient musical theory to new heights with the hazy moonlit masterpiece, Promises.

Promises is fruit of three titans of their respective craft.  Sam Shepherd (AKA Floating Points) is a DJ who has transcended the club scene to create delicate downtempo mood pieces joined up with free jazz pioneer and protege to Coltrane and Sun Ra, Pharoah Sanders; one of the last true living legends of jazz's gilded age.  Then, just to add further depth and beauty, the duo commissioned the London Symphony Orchestra to accompany their tracks.   The result is a breathtaking 46 minute suite, divided up into gracefully nuanced movements.

On face value, the relationship among the three parties are very superficial, but diving in, they all have a deep reverence for space.  They all work off a sweeping keyboard roll that provides the backbone for the record, making room for each other, and room for emotion to come to boil and simmer.  Sanders, Shepherd, and LSO all avoid taking the lead.  Sanders' tenor is often what comes most to fore, but he abstains from free jazz squealing, opting to work in communicative tandem with everyone else, merging tastefully with the lush orchestral swells.  This makes Promises calming and fluid; a sonic sensory deprivation tank.

While Sanders is what maybe most holds the record together, Shepherd is a hugely understated workhorse of Promises.  It is a difficult task for an electronic producer to merge with such dignified instruments and not come off as callow and unsophisticated.  Shepherd rises to the challenge by creating unobtrusive beeps and bops that add celestial depth to each piece.  When he does take the lead it is with controlled atmospherics, adding dynamism without bludgeoning the fragility of the movements.

Promises was a bit of a risky endeavour:  Three of the best-in-field getting together to write a record, with each highlighting their own respective talents without stepping on the others' is no easy feat. Each movement posed the potential for chaos.  However, Sanders, Shepherd, and LSO all navigate their ever-revered space beautifully, creating openings for one another's talent and tact to shine through as they magnificently weave themselves through this remarkable musical world they created.