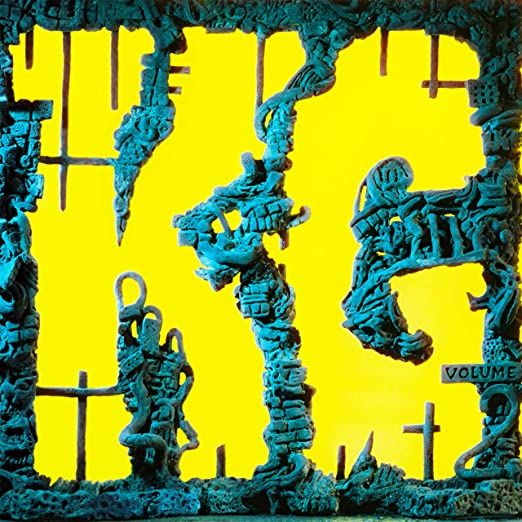 There is no rest for the weary, and King Gizzard and the Lizard Wizard certainly agree.  Now ten years into their lifespan, the Melbourne psych-rock outfit has produced their sixteenth (let alone their magazine of B-sides and EPs) full length album with the recent release of KG.  Always the musical chameleon, each KGLW release is something of an event; a new stylistic exploration.   Now that the band has flirted with nearly every sub-genre of psychedelic rock, King Gizzy has hit upon their newest frontier...a genuinely eclectic record

By and large, KG is another experiment in Microtonality; a sequel of sorts to 2017's Flying Microtonal Banana. For those not familiar with microtones, it means the use of quarter tones, rather than the traditional semitones.  Put simply:  More notes.  These smaller intervals give the guitar a more eastern, sitar-esque, sound; one very on-brand for their psychedelia.  However, the use of mircotones is about where the thematics end.

King Gizzard's records have a tendency to be very stylistically repetitive.  The band usually does an LP-length deep dive into a particular musical idea (psych-metal, psych-folk, psych-garage...you get the picture).  KG is very different in this way, as it feels more like a compilation of these past styles.  Even though it may sound more unfocused, or less ambitious on paper,  this is not a criticism in the least.   In fact, the added diversity makes for an extremely engaging listen.

KG opens with a quick introduction of microtonal guitar in, "K.G.L.W."  While it is more of preamble than an actual song, this is a unique and interesting 1:36 of King Gizzard music.  This is probably the sparsest track of any recorded King Gizz tunes; a band lauded for its cacophony of sound and tenuous order within chaos.  The eerie calmness did not last however, as "Automation," a song that would fit perfectly on Microtonal Banana, follows up with a relentless energy that pulses throughout the rest of the album.  The album progresses, going through a rolodex of all of King Gizzards prior sonic forays, with varying degrees of shreddiness, from cosmic folk to goopy stoner rock; all of it held together by a similar intensity and nonwestern aesthetic.  The biggest surprise on KG is King Gizzards first crack at EDM with "Intrasport."  With its heavy disco beats overlayed with microtonal riffing, King Gizzard create a trippy dance party that would make even the headiest psytrance DJ jealous.  While the band should never lose their garage vibe, this electronic style is very well done and worth, at least in some degree, revisiting.

Part of KG's diversity may lay in its recording style.  Just like the rest of the world, King Gizzard had to make the best of 2020, so they recorded all their compositions individually, hidden away in their own respective quarantine locale. While nothing produces better music than a band as a singular unit, the extra breathing room gave the boys a nice panoramic; a larger sonic canvas.  While the results might be slightly less experimental for a band like King Gizzard, KG continues to be refreshing listen after listen.

King Gizzard and the Lizard Wizard are in a pretty interesting place, career wise. They have released an onslaught of album throughout their decade in the spotlight, and have become the poster-boys of 21st Century psych revival.  Subsequently, they likely feel the same pressure to push the envelope that stifle many of the other innovators.  KG sounds like a band very comfortable and confident in their own sound; an album that not only highlights the strengths of King Gizzard, but builds upon them.