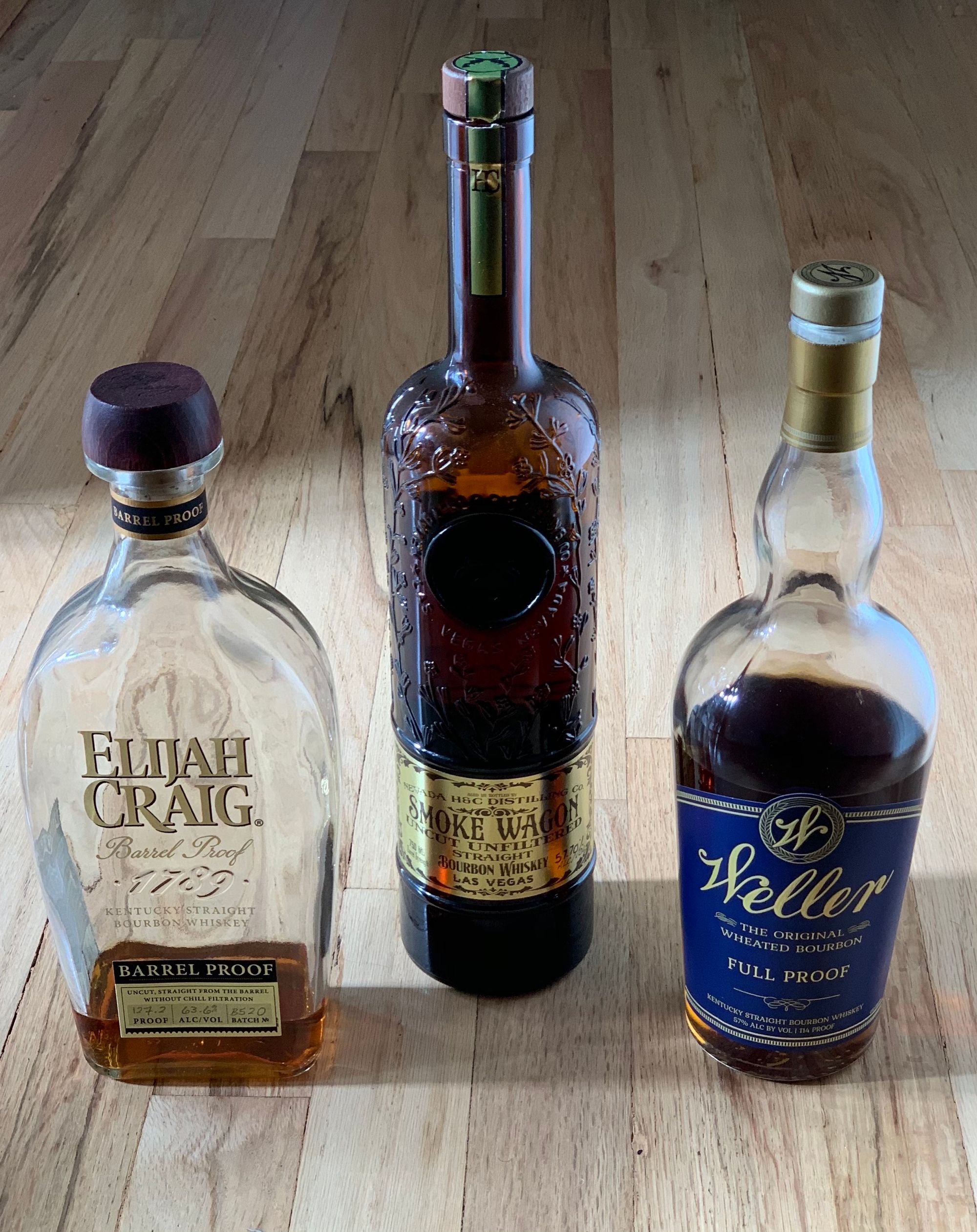 I drank a lot of bourbon in 2020, and I drank a lot. But, I also developed an expensive hobby collecting and sampling different (mostly) bourbons this year too. So in the interest of wanking off some words which I enjoy, and sharing some information you might, here we go!

In this round I'll list off some of my favorite affordable sipping bourbons.

A perennial contender for this category, Elijah Craig tops my list this year for value and availability. Clocking in at 94 proof and selling at MSRP for about $27, it's pretty hard to beat. Elijah Craig consistently tops many lists for its price-to-quality ratio. My bit of advice is to keep an eye out for store picks– which are abundant– and can range from 8 to 12 years in age. The hype is real (let's just hope Heaven Hill doesn't jack up the price).

From the Wild Turkey line, Russell's 10 Year bourbon is another frequenter of top-10 lists. Like the name says, aged 10 years and approximately $30 MSRP, it's another staple crop of the bourbon world.

Not exactly a newcomer per se, but this really seemed like the year corn whiskey in general broke out. Mellow Corn is exactly what it sounds like, and nothing more, nothing less– but for $13 can you really complain?

This offering from Jim Beam supposedly replicates the original recipe for Jim Beam bourbon. The name is taken from the original label James Beauregard Beam bottled his spirit under. Already renowned for it's peanut-y finish, it's actually pretty good for the $15.99 MSRP.

Yea, probably an unpopular opinion, but I stand by it. There's no reason any place should be limiting this bourbon to 1 per customer– I wouldn't buy it if it was half-price. With an MSRP of around $30, but sometimes selling for more, this bourbon takes the cake for me as the most overrated bourbon of the decade. Clocking in at 90 proof, this bourbon stings as though it's 100+, with little redeeming qualities.

Another hot take– just because it's cheap and boozy doesn't mean it's good! I've seen all of Evan Williams products hyped this year, and granted they are not overpriced like Buffalo Trace's line, but at the same rate unless you live in bumble-fuck Germany or something, there's no reason to be drinking these. White label Evan Williams is a fantastic mixer– it's clean and its added proof assists when the ice melts. But let's not kid ourselves, drinking this neat is punishment.

Final Round: The Best

The B520 batch is something any regular bourbon drinker could tell you was a knockout success this year. Able to be found at sub $50 MSRP prices, and clocking in at 127.2 proof, this bottle could qualify under multiple best-of categories. In essence a concentrated form of the lower proof Elijah's, this oily, oaky treat is a must have for any enthusiast.

I looked all summer for this (note: don't bother, these things drop in December and are able to be found in a lot of places if you look hard enough) and finally ended up landing 2 in one day. Praise be I did because this is amongst my personal favorites of the year. Encompassing all the deliciousness of Antique 107 (Old Weller Antique) at a slightly higher proof, there's nothing left wanting with this bourbon. Good luck paying the $50 MSRP on this bad boy, even the big box stores around here were selling it well north of $100.

I put this in a flight of wheaters one night and it 100% held its own– I'm eager to do a blind test next. While this is actually a high-rye technically, it seems to lack that spicy sweetness that tends to identify rye for me. It really fit in with the Weller FP and Maker's I tried it next to, and at $60 MSRP it is far more readily available at that price than the Weller FP.

Not to be left behind, Maker's Mark Cask Strength wraps up my best of 2020. A readily available imposter for Weller 107, I found this to be a very enjoyable and affordable pick. At approximately $50 MSRP, and ubiquitous, you can always rely on this pick in a pinch.