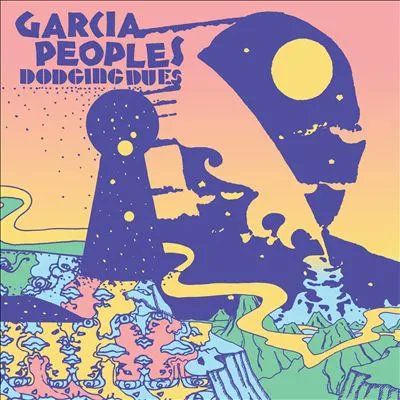 For the past five or so years, Garcia Peoples have been a linchpin between two tangential but ostensibly different genres.  The New Jersey sextet walk the psychedelic line between indie rock and jam.  Their band name is no accident; it is clear through their jangly long-form improv that this band is pretty studied in The Dead and several others in the jam band guard.  But (again, like The Dead, but Garcia Peoples contemporaries), they have beefy enough structures and styles to allow songs to stand alone on their own merit.  While they can, and do go off, there is a groundedness that always brings them back.   Dodging Dues, Garcia Peoples fifth LP, is the bands continuation on their focus on songs...at least in the studio.

Dodging Dues wastes no time getting to the point; the album has one lengthy eight minute odyssey, but the rest of the songs hover around the four minute mark.  Fear not, the album is still filled with balls-to-the-wall guitar, but it is driven and purposeful.  Garcia Peoples certainly have mastered the studio vs stage paradigm, opting to save the improv for onstage communication, where figuring it out is part of the fun.

No strangers to trying on different hats, Garcia Peoples roll through several of them on Dodging Dues.  The record is bookended with some pretty hard-driving riff rockers, but the songs in between also experiment with some bluesy shuffles and celestial twang.  Never known for brooding, there is a lightheartedness that runs through Dodging Dues.  But as a pleasant divergence from many of the jammers that have come to fore in the past few years, there is a tangible and rugged earthiness about Dodging Dues, and Garcia Peoples in general.  Even at the record's most cosmically blissed out moments, there is a brawny toughness that keeps that runs through.  This is a band more reminiscent of Neil Young, The Allman Bros or the other jam bands of yore, who had an undeniable grit about them.  Garcia Peoples give more nods to classic rock than many of their peers in both the indie and the jammy genres.

It is exciting to witness the ongoing maturation of Garcia Peoples.  They have found the sweet spot between pushing their limits and creating a familiar sound, Dodging Dues is a great example of the bands position along that journey, and just a fun record for many interested parties.  From the atmospheric to the hard charging rock, there is a little something for all the guitar lovers out there.