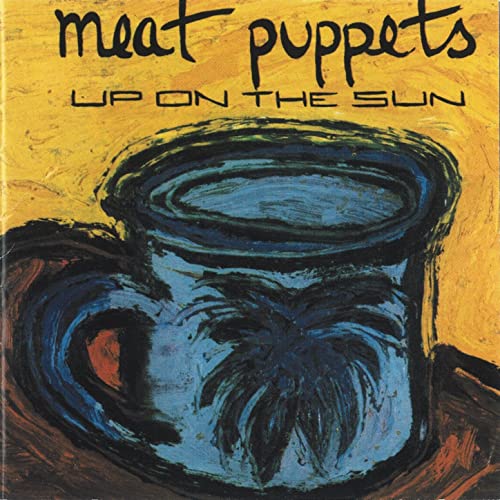 Like most people in their late thirties through late forties, I got introduced to the Meat Puppets Nirvana covering a handful of their songs during their legendary Unplugged in New York performance.  Assuming they were some one-off punk band, any further research into the Phoenix bred rockers lay dormant for over two decades before discovering their magic and eclecticism via my growing interest in indie-rock.  Coincidentally enough, Meat Puppets started off as another one-off punk band, before their third record Up on the Sun changed their sound forever, as the band helped usher in a new form of rock without really trying.

Following their 1982 hardcore debut, Meat Puppets took a step back from their hardcore sound to lean into acid folk with their sophomore effort II (note: This record contains all of the 'Nirvana songs').  While quite a striking change, their sound evolved even further with their follow up Up on the Sun; an album which focuses more keenly on short-form jangly psychedelia.

When it released, Up on the Sun had a uniqueness at the time that is now pleasantly adopted by some of the heavy hitters of the modern indie world.  There is a laid-backness to this record that is extensively cheerful while still encircling the Meat Puppet's gravitas.  While there are some spacier moments, Up on the Sun is by no means a slow record.  The songs rock through at a pretty fast pace, and button up quickly; most songs are under four minutes.  The guitar work is outright shimmering throughout, filling the record with playful trills.  And the band works in a communicative way (something not terribly traditional in the punk world) to create an airy sonic palette.

I really started thinking about the Meat Puppets these past few days after seeing one of my favorite rock lyricists and guitarists (and celebrity crush), Courtney Barnett this past Sunday (Jan 23) in Chicago.  This is my second time seeing the Melbourne rocker, and was again absolutely blown away by her ability to flawlessly dip from jangly garage rock to kick-ass head-banging grunge, and to be able to convey the human condition with a lovable levity; more of a cheeky millennial cynicism rather than the more sardonic and disdainful vibe from the nineties. However, outside of Barnett, there are a wealth of bands and artists who have adopted this shapeshifting sound developed and harnessed by the Meat Puppets in 1985.