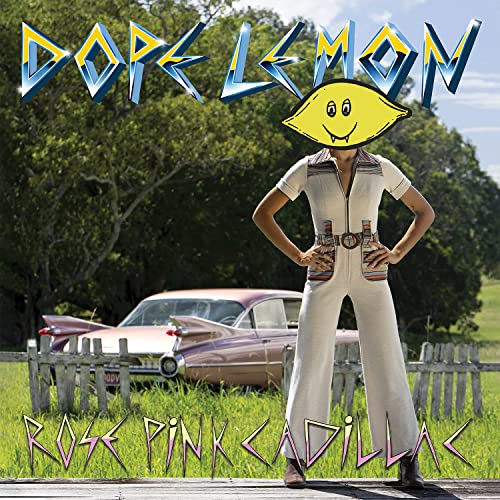 Angus Stone (AKA Dope Lemon) is probably a pretty carefree dude.  He has released three full length albums, and they all dawdle as pleasantly and nonchalantly as the Australian culture that conceived them.  Stone is essentially OZ's answer to someone like Kurt Vile or Mac DeMarco (or, I guess a male's answer to Courtney Barnett); slyly textured and psychedelic, but certainly not trying too hard.  With his new record, Rose Pink Cadillac, Dope Lemon continues his laid back path with an album that makes us all yearn for the warmer weather and short-sleeved shirted days ahead.

Rose Pink Cadillac offers few surprises.  Stone croons along to some upbeat surfy lo-fi tinged in enough just reverb to add some polished dimension, just like he did on his previous records.   The songs are fun and idyllic as Stone waxes about dancing the night away, falling in love and generally enjoying life; all of these good vibes are carried on by his soulful and mellow demeanor.  Despite these fairly cliche platitudes, Rose Pink Cadillac comes off pretty genuine.  A sincerity runs through Stone's record.  He really this untroubled; enviously content with his life Down Under.

Although it doesn't take any real risks, Rose Pink Cadillac certainly isn't stale.  There are infectious grooves that help move the record forward, and keeps it engaging enough to hold a significant amount of interest.  It's actually a fairly danceable album.  The album peaks at the penultimate "God's Machete," a track made for cutting a rug in the moonlight.

A big difference between Rose Pink Cadillac (and Dope Lemon in general) versus some of his contemporaries is a noticeable lack of depth.  One of the great things about the aforementioned Mac DeMarco and Kurt Vile (or Barnett) is their relatability within their lyrics.  Their words, poured over easygoing grooves, offer an empathetic juxtaposition as they range from pensive and indecisive (Vile and Barnett) to downright dark (DeMarco).  Artists like these give the listener a satisfying sense of relief...if you move with a smile and keep a cool head, we can all get through our heavy times.  With Dope Lemon, there is no real need for a cool head, because there just are no heavy times.

All that said, Rose Pink Cadillac is by no means a bad record, it just requires significantly less active listening.  Its vibey aesthetic can easily be absorbed among the chatter of an outdoor party. For what it is, and what it is supposed to be, it is a damn fine record; a perfect soundtrack for any summer BBQ.