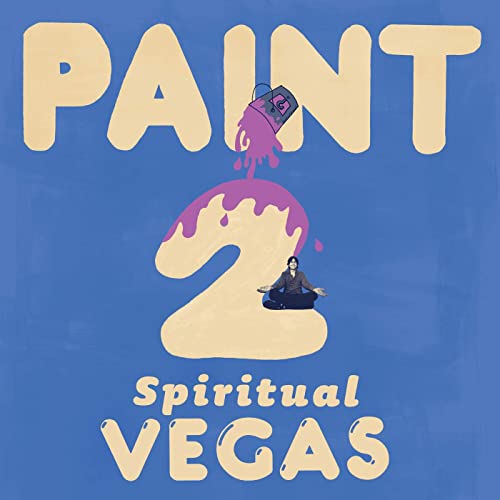 While maybe not necessarily pioneers, the Los Angeles based Allah-Las have mastered their own little corner of the psychedelic world.  Their languid lo-fi surf rock flows as leisurely as a California sunset breeze.  Between albums, Allah-Las guitarist Pedrum Siadatian tinkers with a tangental solo project titled PAINT.  With his sophomore album, Spiritual Vegas, PAINT expands on the tested formula of his main hustle, to positive results.

Spiritual Vegas is a lengthy collection of laid-back psych rock numbers, many of them under two minutes in length.  This is is kind of an odd juxtaposition to have songs be both so unhurried and so short, but PAINT is able to pull it off fairly well;  the ideas, for the most part, seem to be fully developed.  Compared to his debut, Spiritual Vegas feels more thought out and methodical.  It has the same DIY feel as its predecessor, but with a little more intention.  This is further highlighted by the increased personnel on Spiritual Vegas, including a couple of his fellow Allah-Las band members.

Make no mistake, PAINT is certainly an aural offshoot of Allah-Las; he is certainly not breaking any new ground or drifting too far out of his comfort zone.  PAINT opts towards nudge the envelope to the experimental, taking the foundational aspects of his work with Allah-Las, and adding more to the pot.  The typical wobbly guitar twang is nicely complimented by Middle-Eastern technique in the snake-charmingly hypnotic "Ta Fardah," and the swingy weirdness of "Ballad of Adelaide" or "Lanolin,"could fit perfectly on a Syd Barrett solo record.   "Wall of Memory/ODAAT" is reinforced by some traditional blues drumming, and the long and winding "Impressions" utilizes space and atmospheric synth washes as the final lull to conclude the beautifully sedentary album.  Spiritual Vegas feels PAINT's love-letter to the 60's taking influences from every musical facet of the era and compiling them into

While all this experimentation is neat, Spiritual Vegas can sometimes come off a little busy.  It's not necessarily that the ideas aren't fully developed, but there is simply too many of them.  Perhaps the album would be a little more impactful to employ less sounds, but to let them breathe a little more; to more fully capture the easygoing vibe of the record. However, it is the nuanced compilation of sounds that make Spiritual Vegas discernible from an Allah-Las record, so maybe that comes with the territory of PAINT.

When all is said and done, Spiritual Vegas is a nice treat, and a great opportunity for PAINT to expand his musical horizons, even if it is only slightly.  While perhaps not as  praiseworthy as Allah-Las on the whole, it is certainly more dynamic. Hopefully Siadatian takes some of these themes from PAINT and incorporates them into Allah-Las; he has some great ideas.