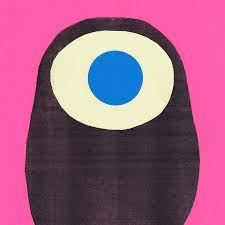 Specifically with the folks my age, modern music fans tend look at electronic music a bit myopically.  To many of us, EDM music err's in one of two directions;  pulsing intensity or warm cloud-like ambiance.  However, the electronic music experience is as multifaceted as any other genre's...probably more so.

One of the more underrated sub-genres of EDM is post-rock. Difficult to define  psych pop can be most easily characterized by rock music mixed with electronic glitches and manipulation, non-traditional rock instrumentation, and emphasizing texture above form, essentially creating mood.  One of my favorite groups of this very niche genre is Stereolab; a French psych pop outfit who's mod-futuristic music feels at home in a sleek Parisian nightclub circa 1960's.  Well, years later, and armed with some collaborations from Stereolab members, London quintet Vanishing Twin bring their own deeply psychedelic post-rock that evokes those same warm lounge feelings on their latest release Ookii Gekkou.

While Ookii Gekkou is gilded with electronics, this is predominantly a percussion record, led by the virtuosic Valentina Magaletti.  Magaletti's beats are the predominant focus in the record, with breaks, scratches and organic instrumentation.  Using the the subsequent instruments and electronics as accent pieces makes their use extra tasteful.  Despite lacking some traditional pop methodologies and diving headfirst into the experimental, Ookii Gekkou doesn't come on the least bit too strong.  "Tub Erupt," arguably the record's most high-octane song, still uses plenty of space and comfort amidst it's higher paces electronics

Rather, the result is a cerebral formlessness throughout the record.  Vanishing Twin add instruments like Flutes and Glockenspiels to create textural ambiance that is equal parts fun and thoughtful.  Songs like "In Cucina" have a spacey free-jazz vibe to them that is a clear point of differentiation between their post-rock or psych pop colleagues.   Ookii Gekkou bops along with a spaciness that allows listeners to enjoy on multiple levels of listening intensity; from work background music to eyes closed enveloped in headphones.

Chigsfork Albums of the Year, 2021