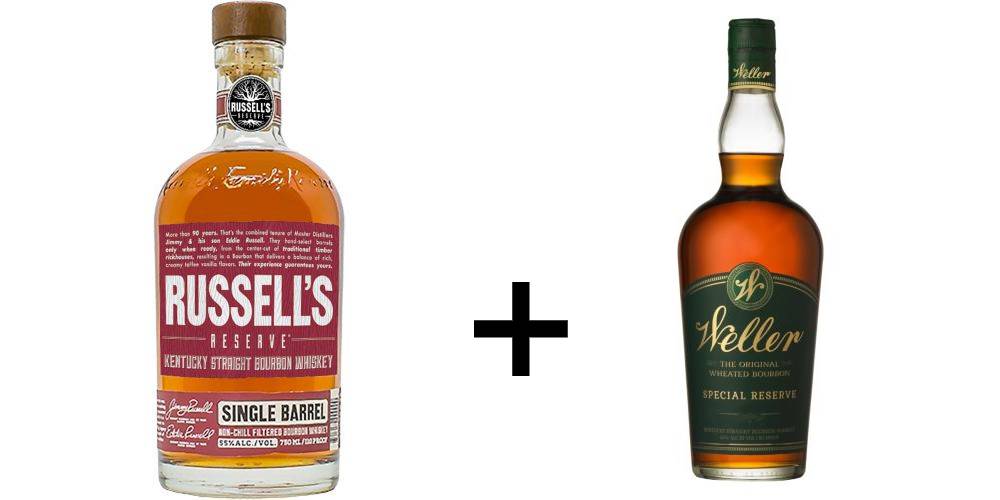 Lately I've been bored just a little with what I can find on hand in Denver's metro area– as a result I've started playing with my own blends of different bourbons. A lot of them tend to involve something strong and oaky– like Russell's– with a splash of something milder like in this instance the Weller SR; but I'm not averse to some plain Four Roses either (which is about as "clear" of a bourbon as I drink). The result is something basically in between, obviously, but I find that quite often I like the blend of whatever it is better than the components that made it on their own. It's super fun, truly, the possibilities become endless.

A common critique of the Weller SR is that it's relatively meek in terms of its profile. While the age isn't advertised with the SR it's generally assumed to be around 7 years old. In terms of complexity something like Eagle Rare or Weller 12 is going to be a deeper experience, but for my money, and as a wheated bourbon lover I am a big fan of the Weller SR.

I have heard nothing but good things about this Russell's single barrel, and I cannot deny, it's a fucking winner. It clocks in at 110 proof, not quite barrel strength, but it absolutely packs a punch. Though there is no age statement on the bottle, it's rumored to be somewhere in the 8-10 year range (Russell's has a 6 year and a 10 year so... that would make sense). The mash build for this bad boy is a more traditional bourbon (along the lines of Wild Turkey) using about 75% corn, 13% rye and 12% malted barley. As you'd expect, it has quite a bit more heat than the Weller SR, even more so if drank neat. In my mind, seems like the perfect tango partner for the Weller SR.

Rewind to last weekend. I'm in a bar in Golden, and lo and behold they have some Old Van Winkle 12 on the shelf. Being the connoisseur I am, I ordered it up neat and happily took it back to our socially distanced table in my biodegradable plastic cup. Supposedly one of the lesser Van Winkles, it was still quite enjoyable for my first Van Winkle experience– quite divine in fact. To keep it short, I'll say that in general the OVW 12 was pretty similar to the Weller 12 that I have in my bar, not super surprising given they're roughly the same mash build as well. Where they truly differed is in the finish– something about that OWV 12 lingered on in a way that just kept me smiling.

Now to my own Frankenstein's monster of a creation, the Bradley Zan Wankle. This is a straight up 50/50 Russell's SiB/Weller SR blend, super easy to remember.

The Russell's SiB really fills in what the Weller SR is lacking in oaky barrel flavor. It also kicks the heat up a notch, but the Weller SR keeps it right in the happy zone. I absolutely love the sweet, brown-sugary smooth goodness that the Weller SR adds– and paired with the bold richness of the Russell's it's an absolute dreamboat. Now, I'm not going to really claim any sort of blend I can come up with can truly compare to a real Van Winkle but I mean, if you want a more available substitute for the meantime I'd say this works pretty well.

In conclusion, both of these are great picks for different reasons– and when our powers combine, I am Captain Planet! Captain Bourbon? Well anyhow, I feel like bourbon is all about preference in the end. I can be pretty satisfied with something like Pinhook which is not hard to find, or Barrell makes some phenomenal stuff as well (albeit pricey). But I think the possibilities truly become endless when you start blending your own bourbons, and I think it adds another dimension to one's understanding of the sweet brown nectar.