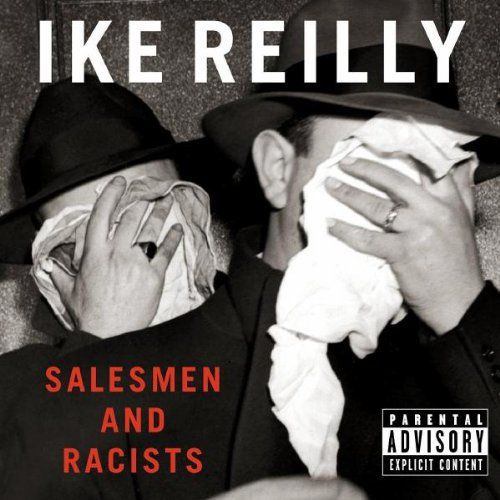 In many ways, at least in regards to the music I listen to, Rock and Roll is a lost art.  By Rock and Roll, I mean Rock and FUCKING Roll!  In an era where the best music seems to lead with the head or the heart, it is sometimes refreshing to hear someone lead with their balls.  Released just a couple of months before the ashes of the World Trade Center irrevocably changed the musical zeitgeist, Libertyville, IL's very own Ike Reilly released his debut LP that salutes the simple joy of the grit, sweat and celebration of rock.

The first seconds of the opening "Last Time" sets the tone for Salesmen and Racists.  Reilly's gnarly howl and fuzzed out riff commences fifty minutes of a time forgotten by some generations, and a time never experienced by others. The next handful of songs follow suit;  big time rock bangers that, in another era, would fit neatly between the classic rock stalwarts on the FM dial...homages to Mick, Keith and the boys, right down to the occasional sax breaks.

Salesmen and Racists shows Reilly still developing his lyrical style; witty and cynical, but noticeably scattered.    His songwriting ranges from tavern sentimentality veiled by lyrics about cars, girls, drinks and songs (often in the same song), to rhymes just for the sake of rhymes.  Outside of some easily digestible couplets and general good intentions, Reilly is less impactful when he slows down his songs; his meaning lies within the aesthetic, not the words.  However...his seemingly elementary lyrics actually carry more weight than if he would have released sprawling poetry.  The record sounds like the inside jokes and tangential banter of a low-lit barroom.  Reilly is a working-class hero whose songs would seem ill-fit with esoteric lyrics.  Meant to be enjoyed rather than dissected, he is a philosopher whose pulpit is underneath the neon lights near last call.

The magic of Salesmen and Racists, and Reilly in general, lays within the vibe.  The album is the soundtrack to the Chicago suburbs, in all its middle-class glory and the perpetual love and hate of 'coming home.'  Just like all the great artists, and all of us, really, Reilly has a tenuous warts-and-all love of where he grew up; a relationship we all reconcile at some point in our lives.  He might be physically or mentally eons away from his high school parking lot, but Libertyville, IL will always be a part of him, the way our own respective towns will always be a part of us.  His lyrics, good or bad, bring up the halfway unique and halfway fun time of getting in trouble in a boring old town, right up to his anthemic belts of "Remember those..." , the ones we all have with those kids we see under the lights at that industrial suburban watering hole.

When we have a party at the Moon Tower, I'm putting on Ike Reilly.

Band Of Horses: Things Are Great