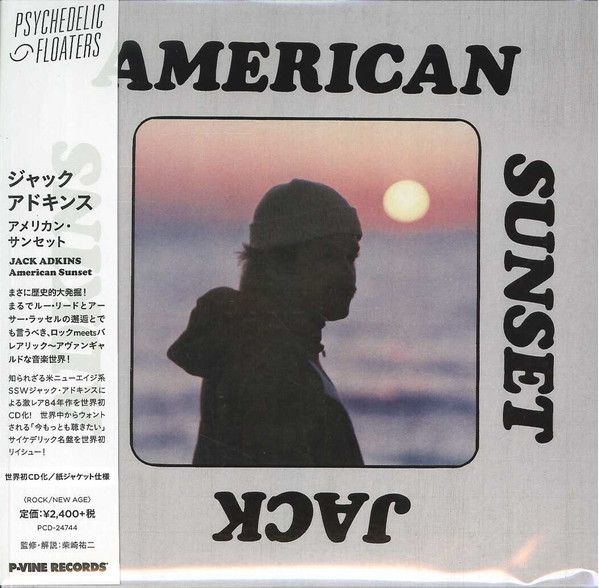 A true American troubadour, guitarist and multi-instrumentalist Jack Adkins set sail in the early 80's to various small venues as sort never-ending tour.  This would go on through the early 90's, when he hopped off the road to take a real job in the tech industry. He was already part of the professional music world, but on the far peripheries.  Never destined to be a rockstar, there was nothing glamorous about his tours, as Adkins didn't advance too much further than the bar and restaurant scene.  He did, however, learned the delightful art of conversation, entertaining, and becoming the quintessential ramblin' man.  Dedicated to the barroom hustle, Adkins sets were often comprised of cliche cover songs, but prior to his trip he was able to record some of his own songs.  Not knowing when this album would come to fruition, he took the tapes with him to be pressed and sold on the road.  The result is American Sunset, some of the best surf-folk that the world has never heard.

It is unclear, to me at least, if these recordings were expressly made for public consumption, or more of a demo for himself and his career.  The music is pretty raw, and the lyrics are well-thought, but perhaps not quite 'there' yet.  However, this uncooked sound and style not help the record, but create its principal artistic statement.

American Sunset is very structurally loose, as Adkins exchanged traditional rock/pop composition for vibe.  There is a lot of reverb laden surf guitar, and some nice synths, with varying degrees of intensity. There is plenty of acoustic guitar work.  For a barroom crooner, Adkins is quite adroit at his craft.   The synthy bedrock offers a lot to American Sunset, as it creates a lot of funky playfulness.

A lot of the songs are Adkins musings over his loops.  They aren't the most complex pieces around, but they aren't supposed to be.  In fact, complexity would take away from the album's spirit.  His words are both fun and poignant, perfect for the clement southern bars he made his home.  And Adkins loops, well, they are just perfect.  The music is not exactly carefree; it's better than that.  It is a presentation of easygoingness through fatalism.  The sounds of the road-weary cosmic country wanderer.  American Sunset is the soundtrack to watching the world go by, and the sweet relief of staring at an orange sky knowing you can only control what you can.

Band Of Horses: Things Are Great