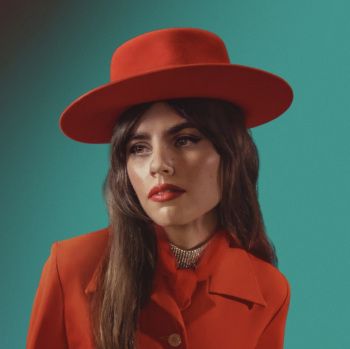 Like the singer, who hails from Australia, Hazel English’s debut album Wake UP!  is not what the name might lead you to expect. For starters, this isn’t really a debut album. English tags on to a reasonably established musical resumé following her 2017 double EP, Just Give In / Never Going Home, which clocks in around one minute longer than this full-length album.  Sparing a dissertation on the difference between an LP and a double EP in the digital age (short answer: there isn’t one, fight me), this album sounds like a more refined continuation than a brand-new initiation.

On the other hand, the hilariously clever video for “Shaking,” may have us questioning just who is initiating who. The track itself is a clear highlight, with an unusually groovy intro, beckoning verses and a pleasing hook which take us away from the introspection of post-punk dream-pop and puts us right beside Once Upon A Time in Hollywood and the beach rock of the 60s.  This song and video almost surely contain some sort of commentary on post-MeToo society, and, if it’s there, it’s a wonderfully ambiguous note.

The stretch from tracks four to seven marks the real core of the album, containing the songs “Off my mind”, “Combat”, “Five and Dime” and “Like a Drug.” English’s silvery melodies resound sweetly from verse to hook, showcasing her still-burgeoning songwriting abilities across all four tracks.  “Five and Dime” offers a sense of nostalgia that’s hard to place, something perhaps a more balanced, lucid Lana Del Rey might have come up with.  One song that seems to stand on its own is “Combat”, which may potentially offer a hint of what kind of material is in store in the future.

However well-crafted much of the songwriting on this album ultimately is, the production seems to be missing a touch of the lo-fi grit that helped define the double EP from three years back. The whole album is awash in reverb, often creating space for the sake of space. As a whole, the songs sound just out of reach, with nothing near enough for us to definitively latch on to. Something is not quite right when an album titled Wake UP! ends up gently, pleasantly lulling you to sleep.